It was a better life. I don’t mean all the travelling and seeing aliens and spaceships and things. That don’t matter. The Doctor showed me a better way of living your life. You don’t just give up. You don’t just let things happen. You make a stand. You say “no.” You have the guts to do what’s right when everyone else just runs away, and I just can’t!

I feel… I feel weirdly nostalgic actually. As though I’ve come to the close of a great adventure. That’s a slightly ridiculous thing to say really, but it’s true. I’ve now completed the Ninth Doctor’s era. All 13 episodes, tied up in a neat little bow. One complete run.

But it’s not quite over yet. The Parting of the Ways. Christopher Eccleston’s final episode. The swansong, as it were.

The swansong – the only song and swan can sing, in its final moments – is supposed to be the most beautiful song sung by any bird. (I think so anyway, I might be misremembering. It doesn’t really matter though, it fits the point I’m trying to make)

And you know what? This really is a beautiful episode.

One of the most important things to talk about in this episode is, I think, the Daleks. This is, after all, just as much their episode as it is anyone else’s.

The bit that sort of epitomises the Daleks in this episode, for me anyway, is actually one of Captain Jack’s lines.

Ladies and gentlemen, we are at war.

And that’s what this is here! It’s a gritty, brutal, war. One final stand, one final resistance. This episode is, I think, one of New Who’s strongest Dalek episodes, and it’s for this reason. We’re seeing an actual fight against the Daleks, full of desperation and fear.

But Daleks being Daleks, they go one better than that. They don’t just fight and kill, they exterminate. In one of the scariest moments of the episode, they go and kill all the other people who are hiding. Who didn’t believe in the Daleks. Who are having their worst fears realised. To see quite so many Daleks, swarming in and surrounding everyone… that’s scary. That is a scary set of Daleks.

There’s so many other fantastic moments in this little war, all of it adding together to create this dark, hopeless fight. There isn’t a line wasted in these scenes – one, chilling, awful moment is when the female producer of The Weakest Link calls Jack, and screams at him “You lied to us! The bullets don’t work!”. And then… she’s killed, only a few moments later. Just like everyone around her. There is so, so much death.

Of course, a benefit of being the second part of a two-parter is that we know a lot of these characters already. The two programmers, male and female, and Lynda with a Y. We knew them, in a way, and we cared about them, which meant what happened to them hurt all the more. The guy, finally, finally able to admit his feelings to his colleague – and then she’s killed. And he goes into a senseless rage – and he dies too. It’s awful.

And Lynda. God, what happens to her is so painful. She isn’t safe. She was never safe. But that last scene is so much worse because it’s silent, yet we know what the Dalek is saying. We can see the flash of it’s lights. It’s an awful, chilling moment.

But it gets worse still. Jack dies. And it’s a tragic, poignant moment. We’ve seen him develop and change since he was that conman. Since he was a coward. (God, that feels like ages ago). Yet here, he’s making the ultimate sacrifice. It’s a brilliant scene. His final line, full of that trademark bravado, really works. I remember quoting that for weeks after this. Actually, no, years. I love that line.

The whole thing comes together and it gives us the best Dalek episodes of the new series. 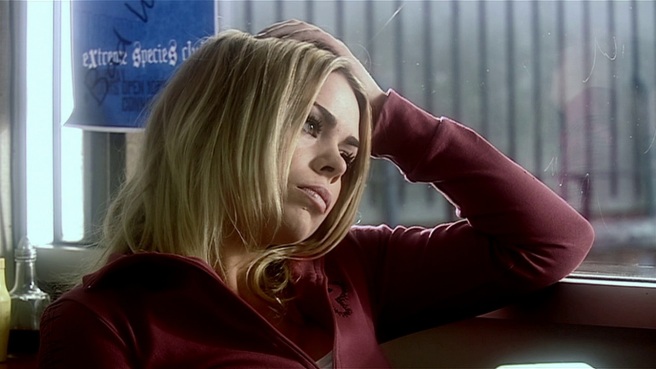 The other important aspect of this episode (because it’s a threefold episode, split between the Daleks, the Doctor, and Rose) is, of course, Rose.

Sending Rose home was, I think, one of the best moments of the episode. It helped to tie everything together, bringing every theme and aspect of the series to a close.

The scenes with Rose and her family were amongst the best of the episode (though having said that, every scene is pretty damn great). There’s a pathos about them, to use a big word. Rose’s refusal to accept the Doctor’s death, and her refusal to stand by and do nothing is wonderful. The speech she gives is one of my favourites of the episode, and it kinda sums up, for me, a lot of the philosophy of the show. It’s quite profound, in it’s own way.

I really loved the scene where Rose tells Jackie about Pete. There’s an element of coming full circle there. The separate threads and plotlines come together and culminate here. Jackie finally accepts the Doctor and Rose’s new life with him, and helps.

And then we have the Bad Wolf. Seeded across the series, threaded through, hinted at, referenced. It’s been there, hiding in plain sight, all the time.

I know it has it’s detractors, I know people whine about deus ex machina. I do not care. I love it, it’s brilliant, it’s wonderful, it’s excellent.

It works in the context of the story because it’s not just a deus ex machina (well technically it is but shut up), it comes from Rose. Rose takes the machine and makes herself a god, and goes out and deliberately saves the day. And it is really, really wonderful. It’s a wonderful, triumphant moment, and I love it. The Bad Wolf storyline has been concluded, and it really is excellent.

Now, there’s one last thing to talk about, but I’m going to try and keep it brief, because this review is getting pretty long already, and I’d like to write an overview on Nine’s entire tenure and story arc next Wednesday.

This is, I think, Christopher Eccleston’s finest episode as the Doctor. And rightly so – the swan’s final song is its best.

He demonstrates so many different sides to his character here – the anger, the compassion, the intelligence – but most importantly, there is closure. The Doctor is finally able to move out of the shadow of the Time War. When presented with that same decision once again, he refuses to make it. Coward, any day. It’s a wonderful, poignant moment. On some levels, you’re happy for the Doctor, because he made the right decision – but it’s at such a cost. It’s already been at such a cost. There is no way to escape, it seems.

Cliched though it may be, and I know that every other person who’s ever reviewed the Ninth Doctor must have said it… but I don’t care it’s great I’m saying it.

Now that it’s the end, before I go, there’s just one thing that needs to be said. He was fantastic.

And you know what? So was this entire episode. There’s so many things I didn’t get to mention, all sorts of little details… but everything was there.