The past has the habit of coming back these days, doesn’t it?

If we follow on from the idea presented last week – that Primeval is, fundamentally, a programme about unsustainable beauty, and nature fighting back against humanity – this finale episode becomes an obvious example of the past fighting the future.

It’s interesting to look at the future predator here, and to consider what it means. It was always the most iconic of the Primeval monsters; understandable, given that it was also one of the few original creatures. Certainly, it is an effective creature – this episode is a well-directed one, and far more tension was wrought from this one episode than have been in any of the preceding ones. There’s something about the future predator that does make it scary. Of course, it’s also the most well suited to Primeval’s fundamental premise – a literal representation of the danger presented by the future.

In that vein, Primeval certainly becomes a very cynical programme; the anomalies here a far more a representation of danger than of grace and beauty, with the attack of the future predators… 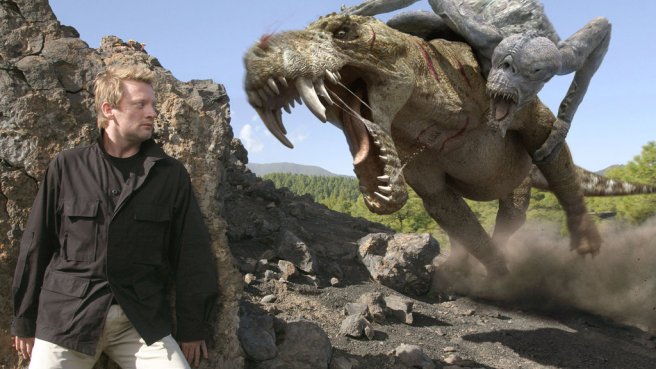 … and, of course, the disappearance of Claudia Brown.

It’s the great unsolved mystery of Primeval – one that positions the programme’s first series as a strange little oddity in its own right, at just enough of a remove from the rest of the show that it doesn’t quite fit alongside any other series. There’s various conflicting theories and assumptions as to what it all meant, how it happened, and why it was never explained; the most commonly accepted theory seems to be that Helen caused it somehow, or that it was a result of the baby future predators being left in the past, or something along those lines.

Both are wrong. The actual answer is this:

Claudia was taken by the anomalies.

It’s made clear from her dream – dream sequences rarely have dramatic merit in their own right, but at times the symbolism can be interesting. So, when we see Claudia’s reflection replaced – subsumed – by the anomalies, what does that mean?

It might simply be that this is the next stage; we’ve seen her largely abandon the bureaucracy she came from, acknowledging and embracing the beauty of the anomalies. Perhaps this is what happens next? (You can also note that both Nick and Connor, the other characters who came closest to engaging with this beauty, are wearing quite dark clothes, whereas Claudia is wearing brighter colours; the implication, presumably, is of a certain innocence and purity to her that they lack – making her ready for this ascendance?)

That doesn’t feel quite right though. More likely, perhaps, is that this was an act of foreshadowing rather than explanation – after all, while the above is an interesting idea, there’s actually very little to support it anywhere else in the programme. Instead, it might just be an indication that the anomalies will offer a reflection of Claudia in her place; that, of course, is Jenny Lewis.

At the end of the day, though, there’s still not a lot to say about Primeval. It’s still difficult to call this particularly well-written television – there are certainly some egregious moments in this episode, though surely the crown must be handed to the shockingly poor throwaway revelation that Helen had an affair with Steven. It’s a very rushed reveal, which is handled quite poorly – and it diminishes the impact of the Claudia cliffhanger, which is where the focus should really be.

The fact is that Primeval actually isn’t all that good from a critical perspective. That’s not to say it isn’t fun or entertaining; after all, I’ve enjoyed watching each episode. But there’s just not a lot of depth here. Which is a shame, really, because there’s certainly the potential for that – often the show gestured at ideas that were quite interesting, and went deeper than what was on screen, but rarely followed them up or pursued them to their full extent.

To some extent, it’d be easy to write off the programme’s first series as a misstep – if you’re grading it all on the metric of characterisation and writing, that is. You can’t deny, though, that Primeval was often suspenseful, usually entertaining, and had some stunning CGI for its time. In that sense, then, the show is a success.

And in all fairness to it – I enjoyed myself. I think these reviews were worth writing, though I do suspect no one read them. And I think I’ll probably do series two next year – part of me wants to start watching it now, actually.

So, for all I criticised the show (and with the series roundup and graph coming next week, I suspect it’s due for some more critique in time) it’s worth remembering that it wasn’t so bad after all.

It’s worth considering what the anomaly represents in all of this.

On the surface, it’s a simple sci-fi plot device. Except, actually, it’s not. We associate time travel with science fiction, but there’s nothing about Primeval that marks it as such – particularly so at this point in the show’s development, when it’s at its most low-tech. There’s no scientific explanation of the anomaly – how could there be, really – and so it must be considered as something else.

The anomaly, then, is magic. It’s a portal to another world – glimmering, shining lights, representing a path into something otherwise cut off from us. How could it be anything else?

It’s more than that, though – because it’s an opportunity for grace. Repeatedly it’s been emphasised that the creatures from the anomalies are beautiful; the majesty of nature is perhaps the closest that Primeval has to any single overarching theme. The close of this episode is a scene of sheer jubilation for Cutter, Steven, Connor and Abby. And, notably, for Claudia.

When Claudia describes the Pteranodon as “beautiful”, after having been demanding to kill it for much of the episode, it’s an important point of progression in her character arc; the moment at which she moves away from the political world, embracing the natural side of things. Embracing that beauty.

Claudia’s prior stance, however, is not out of the ordinary – it’s not anomalous, if you will. It’s the same stance represented by people like Tom Ryan or James Lester; one of limitation, one of control, one of constraint. The grace of the anomalies is a liberating force, but it’s one that can only be considered an aberration in the world that Claudia Brown came from.

But then, there is more to it. The anomalies are also a representation of danger; more specifically, it’s a danger that’s always framed in terms of consumption. Akin to the ouroboros, the past is eating the present. To reassert the beauty of the past, the present must be cannibalised. Subsumed.

Arguably, you can see this carrying across the entirety of Primeval; any trips to the future have always affirmed the idea that humanity plunges the planet into a dystopia, leaving nature as a dead and barren wasteland. For all that Nick and his team think they’re helping, they’re not – they’re an extension of the bureaucracy represented by Lester and the government, ultimately forming a part of the same system that brings about the end. The dystopian future was always caused by attempts to control the anomalies, rather than letting them run their course – from the ARC in series 3, to Philip Burton’s later efforts as the series drew to a close.

This casts the anomalies in a different light again. Taken as a natural phenomenon, they should be understood as a response to humanity – the immune system fighting back. Primeval is, then, a fiercely environmentalist programme; it is, after all, quite literally depicting nature itself trying to reassert dominance over humanity – yet not through violence, but rather through beauty.

Certainly, this is the most obvious interpretation of later years of the programme; here, though, it’s less obvious. One could take the character Rex as a suggestion that humanity can live alongside this grace without corrupting it – and yet, consider what happens to Claudia Brown. In this episode, she finally understands the beauty of the anomalies; in the next, she disappears, to be replaced by a woman far more firmly entrenched in the world of bureaucracy than she ever was.

All of which, in turn, prompts an understanding of our main characters which is in fact far darker than initially appears. Hoping to preserve what they clearly acknowledge as beauty, the team instead become an eschatological archetype, engaged in a wholly futile fight against an unavoidable status quo. For all their attempts to engage with the grace of the anomalies, they are instead unwitting agents of the control they so often try to shrug off.

This then begs the question – by the standards of the programme itself, who is the real hero? Who is, fundamentally, in the right? The answer is obvious.

When viewed through this lens – ie, taking the anomalies as the centre of the show, rather than merely a plot vehicle to allow for prehistoric escapades – Primeval takes a very different stance. It becomes difficult to see our heroes as heroes, per se.

And yet, perhaps they still are.

Primeval, understood in this way, is a crushingly cynical programme. Yes, it’s about a reassertion of beauty in the face of the degradation of the natural world (consider the setting of each episode too – always an artificial version of nature) but it features main characters whose actions are fundamentally yet unknowingly at odds with their worldview, and ultimately posits that nothing can be done to avoid the end of the world – indeed, their very actions advance this dystopia.

However, our heroes always maintain a level of positivity and optimism – far moreso than Helen, who grows increasingly nihilistic as the programme goes on. It’s this nihilism that is ultimately the clearest argument from which to denounce her as the hero – for all that she initially embraces the liberation of the anomalies, her eventual slide into nihilism is surely incompatible with the beauty of nature that the series holds paramount.

Perhaps, then, the fact that the team were able to create their own beauty indicates they do understand the premise of the show after all.