It’s not so different from your time.

In a sense, Planet of the Ood was always going to be necessary. Following their introduction in The Impossible Planet/The Satan Pit, the Ood demanded a follow up; indeed, one was initially planned for Series 3, in the episode that became 42.

The reason it was necessary is simple, if not necessarily obvious. It’s not the fact that the Ood have a distinct and memorable design, though they do; it’s also not a case of budgetary limitations and the need to reuse props, though I imagine that did play a part. Rather, it’s because the fundamental concept of the Ood demands consideration and deconstruction as soon as it’s raised, and that’s not something they found the time for in their original story.

At first glance, we were told that the Ood were a race of natural slaves, a servant race who need to be given something to do – ‘employing’ the Ood, as it were, was a kindness more than anything else. It’s not difficult to see the parallels between that and historic justifications of slavery; when those parallels exist, and as overtly as they are in the case of the Ood, it’s important to take them and respond to them. If ignored, it’s an uncomfortable lapse at best, and a damning flaw at worst – look at the House Elves in Harry Potter, for one thing. (Of course, there’s a lot of things like this in Harry Potter if you look back on it in hindsight.)

So, yes, Planet of the Ood – an episode dedicating to questioning and deconstructing the assumptions made during the Ood’s first introduction – was necessary. Arguably especially necessary in something like Doctor Who, in fact, given that a big part of the series is about, at least nominally, helping people, questioning authority, and standing up to injustice. That’s a poor encapsulation, admittedly, but it’s the basic idea – certainly in an episode where humans have been enslaved by funny looking aliens, you’d expect the plot to be about freeing the humans. So, yes, of course it’s necessary to do an episode about helping the Ood.

That having been said, though, the most interesting part of Planet of the Ood is how it’s very pointedly not about ‘helping the Ood’.

It looks like it is, certainly. There’s definitely a sense of active involvement; it follows the same broad shape of most Doctor Who episodes, and between the chase scenes, action set pieces and eventual confrontation with the villain, it feels like the Doctor comes in and saves the day.

Instead, Planet of the Ood actually avoids that – sure, the structure obscures things, but for the most part the Doctor and Donna are actually just observers, just watching a revolution from the outside. In doing so, Planet of the Ood very neatly refutes the white saviour concept that can, in fact, be read into a lot of episodes of Doctor Who. The Doctor doesn’t wade in and save the day, because there’s actually not a need for him to; it’s not his place to. But there’s another smart thing going on here too, advancing that idea further. The episode doesn’t just position the Doctor and Donna as observers, but up to a point, they’re arguably complicit. Certainly, there’s a very pointed critique of how the Doctor acted in The Impossible Planet, and the way he just accepted the suggestion the Ood are naturally docile, naturally servants. He might be an observer, but he’s not outside the system.

In turn, it’s worth looking at Donna, and her role in the story. If there was still any expectation that Donna would be a silly, comedic companion, this would surely have disproved it entirely; this episode has some of Catherine Tate’s best work in the role. What’s particularly notable is that for all the past few years of Doctor Who have been about opening companions eyes – Rose’s speech about “a different way to live” springs to mind – this is the first time the show has really delved into that. Listening to the song of the Ood is much more of a different way to live than simply walking in a time long since past or breathing in the alien air. It’s a far more nuanced and considered portrayal of how TARDIS travel can change perspective than we’ve seen so far, and it’s something I hope we’ll see again in future. 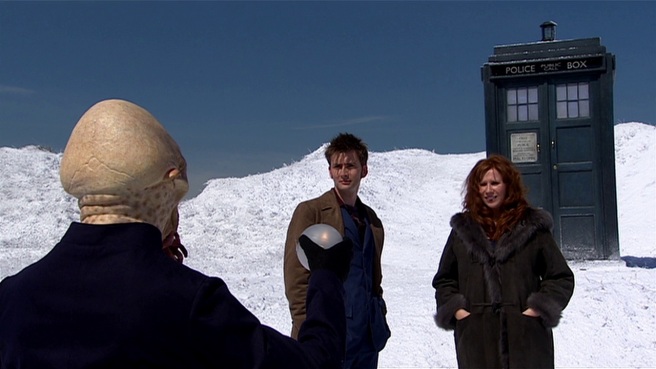 Admittedly, it’s not perfect – there’s one particular flaw that springs to mind.

The ending feels a little easy, almost as though it’s missing part of the point of the wider episode. By that I don’t mean the moment where the Doctor turns off the psychic dampener affecting the Ood brain – though one does sort of wish Sigma had been allowed to have that moment – but rather the line about how all the Ood will be returning home soon. It’s less than convincing, a line that seems to aim more for a neat conclusion that trying to ring true particularly; if you look back in real life, it’s never really that simple. Even after slavery was made illegal, it still continued for the next few decades – and that’s even before you get into the whole “who do you think made your clothes” sort of thing. It’s difficult to believe that everyone would simply go “well, better send the Ood home now” – arguably, it feels like a blindspot that would prompt another story in the same sense that The Impossible Planet’s claim the Ood were a natural slave race prompted this one. Indeed, you can easily imagine a Jodie Whittaker story set on a mining base a year or two after this story, with a corporation taking advantage of illegal Ood labour they’re simply not mentioning.

But that’s one flaw in a story that has a lot to like going on within it. Russell T Davies described this story as being quite grim, and he’s not wrong exactly, but equally – Planet of the Ood is a pretty effective model of ‘mature’ Doctor Who. It’s still got a certain humour and levity to it, but there’s a very thoughtful, very conscious through line to the story; this is the sort of story to aspire to, rather than big battle scenes and threatening aliens.

Ultimately, then, it’s a very strong episode – the best of Series 4 so far, and I suspect were I ever to try and rank them, I’d consider it amongst the best of the Tennant era full stop.