I looked down upon my new dominion as Master of all, and I thought it good.

What strikes me about this episode is quite how fraught it is.

In part that’s because it’s grounded, in a way that previous finales haven’t necessarily been. Bad Wolf drew its strength from the juxtaposition of the mundane and the terrifying with those brilliant game shows; Army of Ghosts, while it began based in the everyday, soon worked its way into the conspiracy theories and aliens more at home in the sci-fi genre.

Here, though, it’s different. The episode is, as I’ve said, grounded; the fight is against politicians, the police, CCTV cameras. There are no Daleks or Cybermen to speak of. Yes, there are certainly fantasy elements to it, and the ‘realism’ is far from the focus of the episode – but, for a time, our main trio are labelled as domestic terrorists and forced on the run.

From that comes a certain powerlessness to our characters, in a way we haven’t quite seen before – understandable, given that the villain is the Prime Minister. There’s a certain level of authority there we’ve not exactly seen to a villain so far; when the Doctor, Martha and Jack are driven to the streets and hide in the dark, it feels significant. There’s a deconstruction of their entire position – the narrative collapse is put into effect.

It’s because of course, at this point – rather unlike the previous finales – the ‘bad guys’, as it were, have already won. The Master is the Prime Minister. Martha’s family has been arrested and her house destroyed. There is no help coming. There’s a real tension to this, and it makes the episode all the more effective. 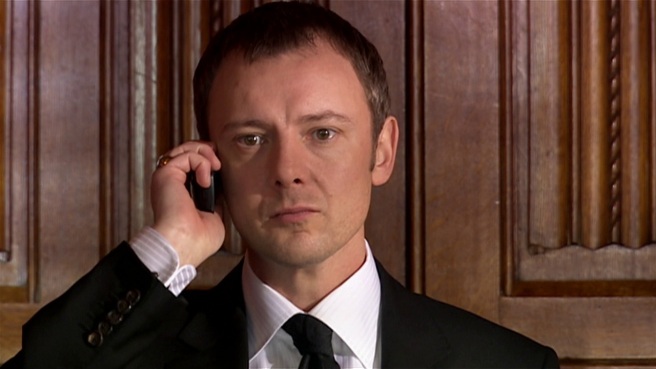 One of the big things that works about this episode is John Simm’s Master.

I touched on this a little last week, and I suspect I’ll expand upon it again tomorrow, but the Master here is perfectly pitched to work alongside Tennant’s Doctor. There really is a sense that the pair are equal and opposite in every way; Simm’s own manic behaviour mimicking Tennant’s inclination towards the same, but also the slick control and charm. They work together fantastically; the phone conversation in the middle of the episode is one of my favourite interactions between the Doctor and the Master ever, and it’s played perfectly by John Simm. Despite everything, despite the fact that the Master holds far greater power than the Doctor, he plays it with a real vulnerability – one that really underscores the depth of feeling, of love and of lust, that’s shared between the two men.

It’s because of that that Simm playing against Capaldi tomorrow is quite so interesting a concept – in a sense, there’s a lot of the same promise that a multi-Doctor special offers. There will, I assume, be a certain frisson resulting from it – a juxtaposition of the two styles and characterisations, particularly when throwing Missy into the mix.

Indeed, over the past few weeks I’ve been saying that Capaldi and Gomez are perhaps the best Doctor/Master pair we’ve ever had, but I’m inclined to qualify that once again. Because the dynamic between Tennant and Simm is fascinating, really; it’s absolutely the right way to pitch the two characters for the show at this point, both diegetically and extradiegetically. It grows not just from the Time War and that personal isolation the two characters have, but there’s a real feeling of emotional depth and weight to the pair here. Certainly, the backstory and motivation presented for the Master is controversial amongst some circles; personally speaking, I’ve always liked it. For better or worse, it grounds the Master in a certain means of storytelling that puts emotion at the forefront – he’s not quite a pantomime villain anymore.

(Yes, I know, the obvious response is to point to any of the scenes where the Master is over the top or camp and say “really, that’s not a pantomime villain?” – but I think that’s missing the point slightly. Those moments of humour underscore the insanity of it; you’re not losing the pantomime aspect, but rather adjusting it, presenting it in a different light alongside the more serious moments.) 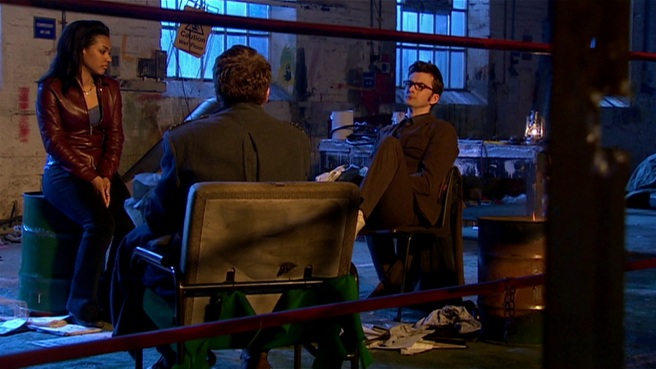 In a way though, and one that’s not often commented on, this is quite a pivotal episode for Martha. Obviously, we know, with the benefit of history, what’s going to happen next week – but taken on its own, you can see that a lot of the groundwork was established this week to make that work.

She gets a rough time of it again here. There’s no arguing against that. Her home, and presumably the majority of her possessions, are destroyed. Her family is kidnapped. Also, there’s the end of the world, and the fact that she’s left to deal with it pretty much alone. (Actually, what’s Martha’s job situation like? Does she still have her position at the hospital? That might be an issue.) Of course she gets the worst of it – Martha is grounded in a way that Jack and the Doctor aren’t, so a story that’s as fundamentally grounded as this one is will naturally affect her far more deeply. It’s her world in a far more manifest sense than it is theirs, and it shows across the story.

But for the first time though, Martha more obviously takes a stand and directly argues back. There’s a steel to her, and a steel to her frustration; the character is in a much different place to earlier points in the series. Even as recently as Human Nature, one suspects that she would have taken a lot of the instructions given to her – here, though, contextualised around her family, Martha refuses to.

It makes sense, of course; the personal stakes give Martha a reason to take more direct control. However, I do wonder if this highlights a broader issue with the series as a whole – that Martha, effectively sidelined by her own unrequited love arc, didn’t really get the opportunity to exercise her own autonomy enough. It’s an ongoing truism of the show that the companion never listens to the Doctor – but I’m struggling to think of any particular occasion when Martha does ignore the Doctor? That might just be a personal lapse, but I think the overarching point stands. I do like Martha, and I don’t want to pre-empt myself too much when it comes to the overall series commentary, but I worry that this moment standing out only serves to underscore how limited her role has been so far.

Ultimately, though, I do really enjoy this episode. It’s another strong one – much like Utopia, and indeed I’ve always been particularly fond of this trilogy. It’s nice to be able to look back on it and to feel justified in that; it’s not actually the rubbish it’s oft criticised to be. (I’m worried for next week, to be honest; one moment in particular gets a lot of criticism, and I hope it doesn’t let me down.)

In the end, though, I quite enjoyed this one.