It is somewhat similar, though – because, much like The Empty Child, 42 is an episode that’s taken on a lot more significance because it marks the Doctor Who debut of our next showrunner – Chris Chibnall. At this point, he’d already written a lot of Torchwood’s first two seasons, and was, functionally speaking, the showrunner over on Torchwood anyway. It’s that that got him the Doctor Who gig, essentially. I’m hoping, across the next few months – and certainly in the lead up to Chibnall’s first series of Doctor Who – to take a look through Chibnall’s back catalogue of Doctor Who, Torchwood, Broadchurch, and even Law and Order: UK, in an attempt to try and discern what Chibnall’s time as Doctor Who showrunner might be like.

For now, though, we’ve got 42. Admittedly, it’s not an amazing debut – certainly, it’s not The Empty Child. The benefit of hindsight means we know, of course, that Chibnall can and will do better, so this isn’t the end of the world – and even then, there’s something a little unfair about judging someone so harshly on a script that’s over a decade old. Indeed, a lot of the complaints I’d make about this episode (and will, in a moment) are ones that I know Chibnall can do better with – indeed, what’s lacking here proves to be amongst his best strengths on Broadchurch.

But even so, there’s something a bit disappointing about this script. I think it was Elizabeth Sandifer who pointed this out, though I’m sure lots of other people commented on it too – this is an episode that promises to offer a 24 pastiche by way of Douglas Adams, and then fails to live up to that potential. When it comes to that sort of possibility, to fail to meet it – well, there were times when I almost felt like they should have cut out all the references to the time and just renamed the episode The Fall of the Pentallion or something suitably mundane.

It’s competent and entirely average in terms of its quality. There’s not exactly any particular spark to this episode, nor any particularly interesting concepts (or, perhaps more accurately, no well utilised interesting concepts). And, I must admit, that’s my chief fear about the Chibnall era of Doctor Who – that what we’re going to get will be just about average, rather than anything special. 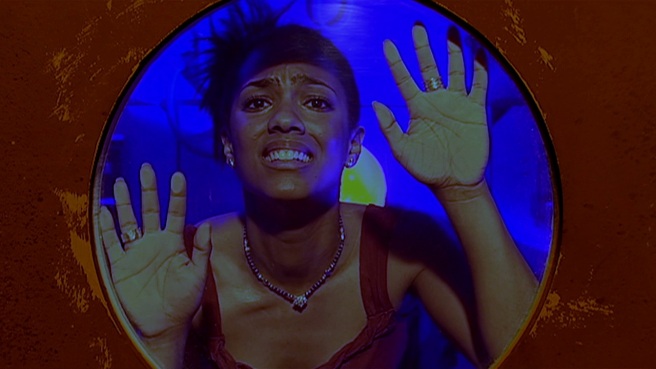 The big thing I want to talk about is the real-time conceit. Is it particularly unfair to say it doesn’t work?

42 should have been the tensest episode of Doctor Who ever – by all rights, that’s the only way it can actually work. We need to feel the countdown with every passing moment; all the circumlocution and digression can’t just feel like standard ambling Doctor Who – it need to be deeply distressing, because they’re running out of time. That moment when Martha’s mum is struggling to plug in the mouse USB shouldn’t be annoying, it should be terrifying! The classic Doctor Who angle of making the mundane frightening – having to flip over the USB several times to make it fit the computer becomes the scariest thing in the world when every second counts! Right?

Well, no. It just doesn’t work. The real-time conceit is ultimately just a piece of throwaway fluff; you could edit out the few lines of dialogue that reference it and the occasional shot of the countdown clock and the episode would be entirely unchanged. It doesn’t use the concept of a real-time episode particularly well – in the end, it’s just a bit of set dressing, and very little more.

Admittedly, I’m not sure how to fix it. One of the big things that would have helped, actually, would have been a timer on screen – not so dissimilar to how Mummy on the Orient Express did a countdown for the Foretold attacks. The cuts to the countdown clock at random intervals are too disconnected, too divorced from the actual episode itself for them to work – and I’m not actually convinced they match up in real time anyway. Having an actual timer on screen would, if nothing else, really emphasise just how much time they had left – and stop it from feeling like just any old episode.

But then, there’s actually more to it than that, because 42 is written like it’s just any old episode. It’s paced as though they’ve got the same amount of time as usual; the characters aren’t really responding to how little time they have left. 42 should have been much more frenetic, and broken the characters up a bit more. It’s actually a real problem that we never got much sense of the geography of the place, and how easy it is to run from one area to another – how big is the ship? It should get to the point where the Doctor can’t just run to the medbay to help out there, because he doesn’t have enough time – that’s an interesting idea to create some tension, surely?

Unfortunately, though, it just doesn’t work. The episode isn’t terribly stunted for it, but it certainly isn’t as successful as it could have been for not fulfilling this potential. 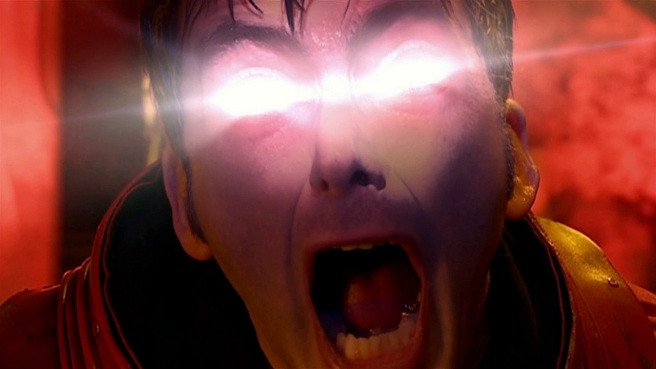 Functionally, 42 takes the shape and format of a base under siege episode – and these are the sorts of episodes that live or die on the basis of their supporting cast. Which begs the question: is the supporting cast of 42 actually any good?

That’s largely down to Chris Chibnall’s writing, though – there’s not much of an attempt to particularly flesh these characters out. Some fare better than others, obviously; Kath and Riley, by virtue of being the ones that the Doctor and Martha play off of, get a bit more depth. Riley is interesting, actually, by virtue of being something of a romantic interest for Martha… which feels unearned, admittedly, and is only going to stick out like a sore thumb later on given that Martha’s interest in the Doctor is maintained.

On which note – the Doctor is a little insufferable in these episodes too, isn’t he? Well, I say a little, I mean a lot. I’m beginning to understand, in a very immediate way, why people don’t like the Tenth Doctor. I think it’s diminishing my enjoyment of the series, to be honest – and even just from my recollection of what’s coming over the next few weeks, I’m concerned about how much worse it’s going to get.

This feels like a bit of a stunted review. My own fault, admittedly; last week I was in a rush to finish it before going out in the evening, before realising I had an extra week because of Eurovision. And now, tonight, with a few more paragraphs to go, I’m finding myself largely out of things to say.

Perhaps that’s just indicative of the episode itself though. Perfectly functional, entirely competent… difficult to get much analysis from. I suspect that’s why it’s easy to criticise this episode, and indeed why I did – because the things it is good at are things that are difficult to write about extensively. It’s easy, though, to criticise the episode, even if that is essentially for being something that it’s not.

Certainly, it’s worth noting, if nothing else, that I did enjoy it. It’s perhaps unfair to ask more of the episode – but if we’re looking forward to years of “enjoyable Chibnall episodes that are difficult to write lots of words about”, this blog is in trouble!