For the third week in a row, we’ve got an episode that isn’t particularly highly thought of – indeed, it’s another one of those that’s largely criticised and looked down upon.

I remember watching this one a few years ago, specifically because I found out that it wasn’t very popular but remembered quite enjoying it. And, indeed, I enjoyed watching it again. In fact, I just went back and checked my comments on it, because I wrote about it on a forum – and I thought it was “just brilliant”, apparently! Then I started criticising Neil Cross, which I’d probably be less inclined to do now, I suppose. Funny how four years change things.

On paper, there’s a lot of stuff that works; indeed, when translated to the screen, there are a lot of things that work too. Most of that is Mark Gatiss, actually. He’s clearly having a whale of a time, and enlivens the whole episode. Sure, he’s only playing around with an established trope, but he carves out a space for himself within it – chewing the scenery with great gusto, yet still managing to bring a degree of pathos to it where necessary. Even though it’s something we’re innately familiar with anyway – the mad scientist is a hallmark of the science fiction genre, stretching back as far as Frankenstein (though I’m inclined to argue that’s more horror than sci-fi, but anyway) – it’s not something that new Doctor Who had done up to this point. And, thinking about it, it’s not something they’ve done since – the closest I can think of is Miss Kizlet in The Bells of St. John, but that’s a bit of a stretch. Or maybe Mrs Gillyflower in The Crimson Horror? Debatable.

In any case, though, that means that Professor Lazarus, wonderfully unsubtle in both name and performance, is something of the definitive mad scientist of the new series of Doctor Who. Generally speaking, he fills that role quite well – like I said, Mark Gatiss gives a great performance – and the idea of the youth effect is actually quite a neat effect. And, of course, there’s a monster! It’s big and weird and fills the monster role very nicely. I don’t have much to say beyond that, but it

All of which is to say that, on its own, this is a nice episode. It’s an entertaining enough way to spend forty minutes, and that’s all it needs to be if you happen to be flicking through Netflix or just want to rewatch a non-event, almost casual Tennant story.

But it’s when taken in context of the rest of the season around it that The Lazarus Experiment just doesn’t quite work. 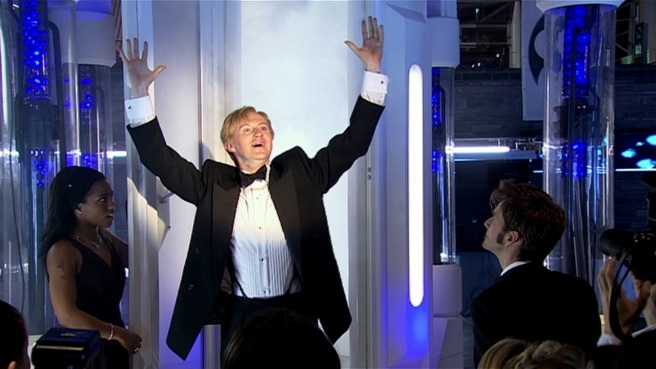 Oddly, you can view The Lazarus Experiment as being something of a centrepoint for a lot of the themes of the Davies era. It’s one of the ones that most overtly grapples with the idea of the “curse of the Time Lord”, as the phrase was coined; where something like School Reunion dealt with this theme, The Lazarus Experiment tries to be about this theme, building itself around that idea. There are lengthy monologues (distinct from soliloquys, I now know) that are almost entirely about that – consider that line everyone loves to quote, “one person could live more in twenty years than another in eighty”. It’s dialogue that reaches for profundity, and it gives the episode a semblance of weight that goes beyond the mad scientist runaround it could have been.

But then, while it might reach for profundity, it doesn’t quite get it. Certainly, something like School Reunion is able to tackle those themes and have a degree of greater resonance because it has a tangible material connection to the past in Sarah Jane Smith. You can see the impact of the Doctor’s longevity, and that has a far greater impact than Mark Gatiss sat naked wearing a shock blanket in a cathedral.

If the episode lacks substance in that regard, then it would have to find it elsewhere – that makes sense, doesn’t it? After all, the problem with the quasi-profound dialogue is that it doesn’t really ring true. As is often the way with episodes that could have been great, it stumbles across the right stance to take without realising, and moves quickly forward: the moment when Lazarus asks the Doctor “who are you to judge me?” is key. Obviously, it’s playing on the fact that the Doctor is, actually, very old, but in some respects, it’s missing the point – which it gets so close too with “imagine what I could do in two lives, or three, or four”. With, of course, the implicit “or ten” following on shortly afterwards.

That’s what The Lazarus Experiment should have done, really. Mounted a challenge against the Doctor. I’m not suggesting he need to be accused of being a hypocrite or anything, but equally, this is the Doctor criticising a man for making himself younger to live longer, when David Tennant is eight years younger than Chris Eccleston. The idea that the Doctor gets younger every time he regenerates is an established one, if not necessarily accurate; the fact he lives lots of lifetimes is just a fact. There’s the potential for something interesting and introspective there – not dark and intense drama particularly, but you could absolutely pitch something at the same level as Thin Ice and how it interrogated the Doctor’s inclination to move on from deaths quickly. It wouldn’t have been difficult to do, particularly; given the mysterious Mr Saxon is Lazarus’ shady benefactor, it’d be easy to give him some knowledge of the Doctor. And, indeed, it could feed quite nicely into Francine’s problems with the Doctor, which are similarly unsupported.

It’s quite odd, really, that this episode waffles around the idea of criticising the Doctor, but ultimately stops short of it. Because he’s actually deeply, deeply unlikable here. 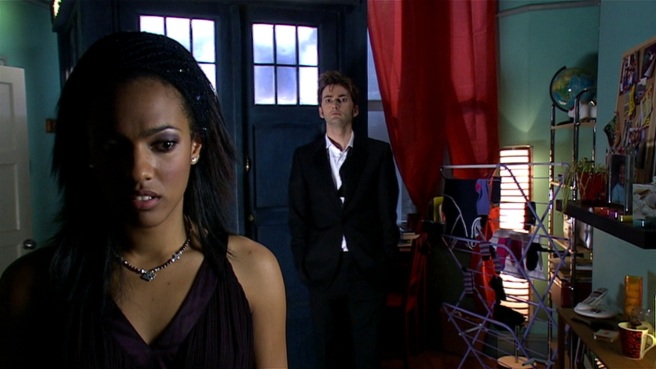 The treatment of Martha in this series is one of the most contentious things about it; it’s this episode that tends to be one of the big examples in terms of the critique. It’s not difficult to see why.

A lot it stems from wider concerns to the series that don’t necessarily originate with this episode – that’s what I mean about this episode diminishing as a result of being placed in its wider context. It’s the choice to present Martha as being gifted individual trips, rather than taken on as an actual companion – in essence, the Doctor is stringing her along. Really, at times, it seems like he’s deliberately teasing her, if not treating her as somehow fundamentally lesser.

I’m not convinced this reflects poorly on Martha, as such; her willingness to put her foot down and demand appropriate respect is admirable, and foreshadows her eventual departure neatly enough. The character is, admittedly, weakened somewhat for still having this unrequited love for a man who has, frankly, treated her horribly – which is, for all I’m willing to forgive The Lazarus Experiment the demand of the series arc, particularly evident in the dialogue here. There’s a vein running through a lot of the Doctor’s interactions with Martha that feel condescending and dismissive, if not indeed outright cruel.

I wasn’t, I have to say, particularly pleased about that at all. Why would I be? The Doctor is not a character I want to dislike. Particularly this Doctor – my Doctor – and it’s a real lapse that this issue ever arose. You can really tell that Russell T Davies was ill and unable to be as actively involved in the production of this series (not that he would have rewritten Stephen Greenhorn’s episode, but certainly could have given him a few notes!) – although, then again, it’s obvious enough that the unrequited love angle was his idea. Maybe it just wouldn’t work at all.

(Well, actually. What should have happened is for The Lazarus Experiment to be moved forward, switching places with Gridlock; the cruelty of stringing her along would have diminished considerably if it wasn’t for such a long time. And, actually, I can’t help but feel that an appearance from Sarah Jane would have helped as well, although that’s another kettle of worms entirely.)

On a related note, incidentally: the depiction of Francine here is quite poor, isn’t it? There’s no real weight behind her dislike of the Doctor – basically just the fact that he seems to be Martha’s boyfriend, and she’s not heard of him before tonight? Even her eventual news from Mr Saxon doesn’t gel, because we don’t know who Mr Saxon is; it makes Francine an antagonistic force in a way that Jackie never was, so we can’t quite sympathise with her when we absolutely should. Once again it does seem that the episode is stunted for not properly criticising the Doctor, when almost every aspect of the episode demands it, if not needs it to function properly.

So, sadly, it’s a weak instalment from Series 3 here. Plenty of fun in places, and I’m glad it exists for the sole reason of letting Mark Gatiss be a Doctor Who villain (filmed on his birthday, no less!), but beyond that… well, there are certain weaknesses it just can’t move beyond. It’s very much not the work of brilliance I thought it once was.