You told us to imagine, and we imagined your irrelevance.

Back in Series One, when they were writing Dalek, they hit on a bit of a stumbling block: Terry Nation’s estate wasn’t playing ball. Eventually, they were able to sort it out in the end (with some help from Steven Moffat’s mother in law, Beryl Vertue), but there was a point when we would have seen a version of Dalek without any Daleks.

The suggested replacement for the Daleks was a sort of prototypical version of the Toclafane – future humans, encased in those flying spheres. We’ll get to the Toclafane in a month or so’s time, but what’s interesting to me is the fact that it was humanity that was going to be set up as the iconic villain of the new series of Doctor Who.

In a sense, it does make rather a lot of sense. The Daleks have always paralleled the humans to some extent; the number of stories where they try to discover the ‘human factor’ that will help them conquer the galaxy is fairly expansive, and of course the fact that they’re a Nazi allegory in the first place means that’s a connection that’s always going to be around. On some fundamental level, there’s a connection between Daleks and humans within the show that doesn’t, and can’t, go away.

So, there’s something quite interesting about seeing an episode engage with that a bit more directly, and to in turn offer an evolution of the Dalek concept. They’re one of the few Doctor Who aliens that resist change, and always have; you can’t even get away with redesigning them anymore! In some ways, that’s actually rather perfect – that they’re the still point around which the show turns, a perfect foil to a lead character who’s always changing, and the obvious villain for a programme about change.

But then, by the same degree, that’s why the promise of an evolution of the Daleks is so enticing. The rules are made to be broken, and this is one of the bigger rules that the show has. Some of the ideas being thrown out here, and the possibilities that are being broached – there is a world, somewhere, where Evolution of the Daleks is looked upon as the successor to Genesis of the Daleks in terms of what it achieved and what it represents. (It is possible that this is the universe where it was written by Steven Moffat, as was the original plan, but to be honest I doubt that too.)

It wasn’t, though. Even I’m willing to admit that, despite my defence of last week – this is undoubtedly a weak follow up. The question that’s to be asked instead, I think, is why this episode isn’t what it could have been. 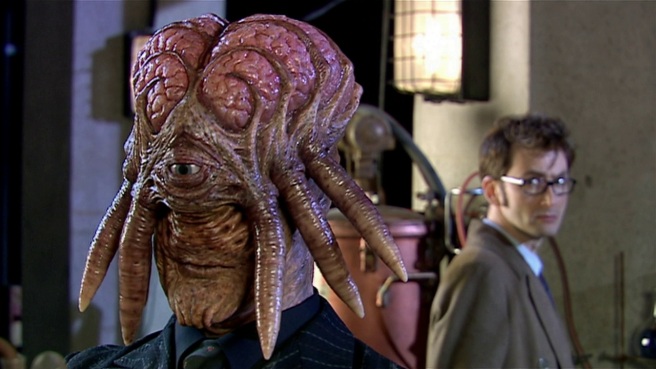 I think it’s worth looking at Dalek Sec, because he’s the interesting character here.

The episode is clearly positioning him as something of a renaissance man, in keeping with the great man of history theory – like the Doctor says, the right idea at the right time, coming from the right person in the right place, could change everything. It’s clear that’s what we’re meant to see Dalek Sec as, and it’s he that represents this evolution of the Daleks – and, I’d argue, the human-Dalek hybrid is a character who could have been as important as Davros.

Obviously, he doesn’t work here. There’s a couple of reasons why, although none of them are particularly interesting, and I doubt it’s any huge insight to point them out. Part of it is the design – it’s less that it’s goofy or anything like that (I’m still somewhat partial to it), but it’s clear that the prosthetics constrain the performance. And, to be honest, I’m not sure that Eric Loren really knows what he wants to be doing with the part anyway – it’s not an amazing performance, really.

But, equally, how could it be? There’s a sense that the script is just a little bit too rushed, and tries to cram too much in while moving too fast. Even though it’s dealing with a lot of interesting ideas, they don’t have the time to fit them in; you move from Dalek Sec fondly looking at the radio, to his big revelation with Solomon, to his about face on the entire Dalek doctrine. It’s just moved through far too quickly, and these aspects are left almost entirely unable to work. Part of that is the pacing; I’m not convinced this episode works in the two-part style. Or, rather, the story was too unbalanced – Daleks in Manhattan had a lot of filler, meaning this one has to move faster than it can manage. You almost wish, really, that the cliffhanger last week hadn’t been Dalek Sec’s reveal, but rather the moment he changes his mind; perhaps some ominous “It is time for the Daleks to die, Doctor” dialogue would have helped immeasurably.

How could he have been the next Davros? Well, maybe a lot of this is just coming down to the version that exists in my head (if I get the time, though I suspect I won’t, I might try to elaborate on that) but it does feel like… well, it feels like this is a character who has legs. Imagine for a second the prosthetics were less convoluted, and the human Sec was played by Julian Bleach; that the character was established more firmly, and given more interesting material here. You can – or, I can, at least – quite easily see the character becoming a longer running adversary to the Doctor, creating a genuinely new paradigm for the Daleks, and offering a huge amount of potential going forward. They could have continued this civil war idea, with Caan and Sec both providing different perspectives, perhaps with the threat of a new Dalek Time War emerging the next time they need an apocalyptic series finale. I wouldn’t even posit Sec as a good or moral character, particularly – just one who thinks the Daleks need to evolve to survive, but retaining the focus on nationalism, jingoism and racial purity and so on.

Alas, though. It wasn’t to be.

The problem, I think, is in part the fact that the episode isn’t very well paced. But then, it’s actually slightly more than that – because despite grappling with lots of different ideas, not a lot actually happens. They take all the toys out of the box, but then they put them back in again after a little bit of a runaround; the actual scope of the plot is very limited, even as the possibilities of the story are wide reaching.

In that sense, the story is a victim of the Daleks themselves. Because the status quo snaps back at the end, and the icon resists change, in the same way it always does. There’s something almost ironic about that; the weight of the symbol means you can’t entertain any change to it, and so of course the story about them changing to survive doesn’t work. It can’t – because the Daleks have survived more than long enough without needing to change yet, so why would they need to now?

And that hobbles it, fundamentally. Evolution of the Daleks isn’t willing to actually evolve the concept – there’s no chance for a revolution of the Daleks in this story. At the end of the day, the people working on the show didn’t want to entertain a seismic shakeup to the Daleks. That’s more than fair; there’s certainly an element of “if it ain’t broke, don’t fix it”, and there was still plenty of room to work with the Daleks recoiling from the Time War. It just means this episode doesn’t quite work as well as it should, or as well as it could, because so much about it would only function in the context of a springboard.

There’s certainly a lot to like here, still. I remain fond of James Strong’s direction, and there are some nice scenes with the Daleks in them. Admittedly, it’s the comedy bits that work best, but hey. And, of course, I absolutely adore Tallulah (with three Ls and an H!), who is probably one of the best supporting characters in the entirety of Doctor Who ever. But then, equally, it’s not like the weakness to the premise is the only big issue here. The way the Doctor, and the narrative, continues to treat Martha is pretty shocking; eventually, I’m going to have to write about it at length, because it is a problem.

All in all, then, it’s an episode that perhaps is befitting of the reputation that it earned, in a way that last week’s effort wasn’t. That’s a shame, really – because it could have been so much more.