Back once more with another series of Doctor Who reviews, this time I’m looking at Smith and Jones. We’re quite firmly entrenched in the period of Doctor Who that I remember, and was an active fan for – not that I’ve ever been an inactive fan, I suppose, but this is definitely an era that I recall fondly. Actually, probably quite a lot of my Who-watching memories are from around this point – if not the material substance of the episodes, a lot about what surrounded them.

For this episode, it’s those publicity photos – David Tennant in the flowery shirt for Freema Agyeman’s casting announcement, and of course the picture below of the Doctor (in a blue suit!) and Martha on the hospital roof building. It’s also the DWA previews, and discussing the episode with my friends on the Monday morning (the teacher told us off for dawdling after assembly). Oh, and the episode of Doctor Who Confidential that accompanied it, where they talk about how David Tennant suggested the Doctor could mouth “it’s bigger on the inside” as Martha said it.

All of the above, admittedly, has absolutely nothing to do with the actual episode itself. But I find it interesting to try and contextualise these episodes in terms of how I would have experienced them the first go around; after all, I suspect that this whole age based re-evaluation of the episodes is the most unique angle I’ve got going for these reviews, so I should probably lean into it a little more.

It’s quite interesting to try and remember what I thought of the episodes on their first broadcast – in lieu of any detailed notes or reviews (those didn’t really start until series 7a) I’m really only going on hazy recollection. And, to be honest, I liked basically every episode of Doctor Who back in the day (the first one I remember feeling genuinely let down over was Midnight, but we’ll get to that next year) so there’s not exactly much of a view to counter.

But then, I guess, that’s probably the theme of these reviews in a nutshell anyway – is the thing I’ve loved for most of my life (indeed, loved for longer than I haven’t) actually as good as I thought it was? Is it as good as I want it to be? Or has all of this just been a bit of a waste of time really? 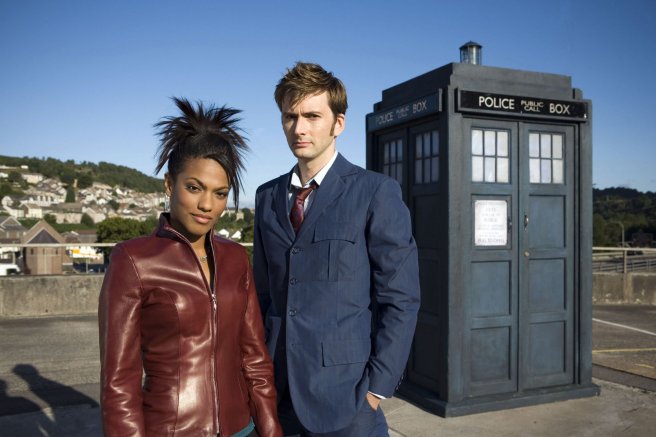 The most interesting thing about this episode is Martha. Obviously, it is, because this is her debut episode, and she’s the new companion – although, rather crucially, she’s also the first new companion. That can be difficult to remember sometimes, I suspect, because we’re looking back on this episode with the lens of history – five more companions down the line, this sort of cast change is clearly part of Doctor Who. But after so long of the show having been Rose’s programme, really moreso even that it was the Doctor’s, this could be quite a jarring shift.

And I think, generally, the consensus is that Martha is a bit of a problem companion; the one who never worked, exactly. I’ve always felt that’s unfair, and at times I’ve referred to her as one of my favourite companions for that very reason – I love all of Doctor Who, and I’ll champion even the bits people are less fond of. (This, I suspect, is also part of the reason why I’ve said the Sixth is my favourite Doctor, and Love & Monsters my favourite episode.)

While I’ve generally re-evaluated this stance – albeit to more or less reject the choosing of favourites altogether – I am still quite fond of Martha. And quite interested in her status as a problem companion, because I remain largely unconvinced that’s actually correct.

One critique I remember in particular was of Martha’s introduction, and the phone call to her family – basically suggesting it was unwieldy and overly complicated. I’d reject that entirely; as a piece of shorthand across one scene, it’s actually a really effective way to create a deft sketch of who Martha is as a person. In some ways, it tells us as much about her as the montage at the beginning of Rose did about Rose; we can see Martha’s the mediator in her family, which in turn shows us different sides of her character. Then at the hospital, we’re seeing different sides to her again – it’s a really nice way of giving us a character who’s quite well rounded. Yes, it’s still only a starting point, but very quickly Martha’s gone from someone entirely new to a character we’ve got a decent sense of.

The other interesting part about Martha – and this is far from a new observation – is that she’s being set up as a direct mirror to the Doctor. He’s a Doctor, she’s a medical student. It’s an interesting mirror that presents a lot of potential across the rest of the series, in terms of her development as a character. Crucially, and this adds to those parallels, Martha is also a character who’s from a sci-fi world in a way that Rose wasn’t; understandably, because the audience is a lot more used to sci-fi than they would have been in 2005. Martha comes along and she’s from the Doctor’s world; when she references the Battle of Canary Wharf and aliens and so on, it’s because she’s someone who has lived in Doctor Who for the past few years.

So, yes, I think this is quite a good introductory episode for Martha. Her character is grounded quite well; she’s someone who’s going to make a good companion, and that’s her starting point. She gets how to do it – she’s going to become a Doctor herself. She’s going to earn that title; her arc is clear from here on. And the potential, moving forward, is exciting.

(Admittedly, yes, there’s a few scenes in which Freema Agyeman’s performance is a bit patchy, but I’d stress that is only a few scenes; for most of the episode, she’s great. I checked online, and this was the first episode she filmed – so it’s understandable that she’s not quite getting into the part completely yet. And also, just to address the other perennial concern – I wasn’t particularly impressed by the kiss in this episode, no. Not this time, or when I was 8! I did like Martha’s teasing flirting with the Doctor at the end though. More on all this in the coming weeks, of course.)

In terms of the rest of the episode, I was surprised at how fast paced it was. I don’t ever particularly remember these episodes as being that fast paced, but they rattle along surprisingly quickly. In some respects, I think it’s probably because of all the criticisms that have cropped up in the last few years about Doctor Who being too fast paced, or not letting everything breathe enough – you forget that the show has been fast paced for a very long time.

Which isn’t to say, incidentally, that Smith and Jones doesn’t let the episode breathe, or is too fast paced; I’d argue it’s actually quite well constructed, as an episode. While it might rattle along very quickly, it does so in such a way that it’s quite economical with the script – there’s almost a ruthless precision in terms of how it moves.

Certainly, the piece is structured very well, and makes a nice implicit distinction between the monsters (the Judoon) and the villain (Mrs Finnegan). It moves between plot beats quite effectively, setting them up in a nice, almost Chekhovian way – Mrs Finnegan drinking the Doctor’s blood is a clever conceit, particularly as the episode allows Martha to figure it out just ahead of the audience, again cementing her as a good companion. (We can see another mirror to the Doctor as Martha arguably makes a similar sacrifice to him, giving up the last of her oxygen – potentially dying – to save him. Admittedly, that this was only so the Doctor could unplug the MRI does cheapen it a little.)

In fact, Mrs Finnegan is a rather wonderful character, because of how utterly perverse she is; the defining aspect of her villainy is the same juxtaposition of the mundane and the otherworldly that gave us a hospital on the moon. That an innocuous old woman, seemingly harmless, can be so dangerous is part of the frisson of her character – particularly when you throw the bendy straw into the mix. Actually, that straw is fantastic, because it grounds the horror in a more mundane way, yet at the same time being quite gleefully sickening. So, yes, Mrs Finnegan is a particularly perverse villain (especially considering her “she was asking for it” speech to justify her actions) and a very effective antagonist for the episode, even if everyone does only ever remember the Judoon.

So! Smith and Jones. It’s actually a very good episode; while I’ll concede that it wasn’t brilliant in places, it clearly demonstrates that Doctor Who can continue without Rose. And – more to the point – it demonstrates that I wasn’t so wrong to like this show, all those years ago.