There are some things which are pretty self-evident about Doctor Who, when it comes down to it. Ideas which, as soon as they’ve been brought up, practically beg to be incorporated into the show – in fact, not just beg, but need to be used. Of course the Time Lords would be the ultimate villains of the Time War (I’m getting ahead of myself there, though). Of course the Doctor is friends with all these different historical figures.

Of course the Cybermen and the Daleks should meet.

And of course they should fight each other.

Russell T Davies once described it as sounding like “bad fan-fiction” and… on the one hand, I can sort of understand what he means. There’s something very gratuitous about it; when you think about it, there’s not really any reason for the Daleks and the Cybermen to meet one another outside of the fact that they’re the two famous Doctor Who monsters. If it was any other pairing, it wouldn’t quite have the same weight (although I look forward to the eventual Ice Warriors vs Sontarans story).

Yet, at the same time, that’s exactly why it appeals – the reason why it has that fanfiction attraction. The sheer insanity it symbolises, to finally bring these two together; that’s fantastic, to steal from the Ninth Doctor. With this story, Davies is quite literally bringing to life the imagination of every fan. There’s something about Doomsday that consistently goes further, time and time again, to properly realise everything that we’ve always held in our heads; even Verity Lambert herself highlighted the spectacle of seeing the Daleks swarming across London in their thousands. In a way, there’s something quite special about that.

In many ways, I think Doomsday contains what I would consider to be the archetypical depiction of Daleks – cruel, scheming, and full of hate. Brimming with evil, and genuinely quite deadly. And yet, at the same time… just a little bit snarky. A cruel edge of sarcasm and smug superiority. For me, this is the definitive image of the Daleks – likely because, thinking about it, this would have been my first proper Dalek story. All others have been measured against this one.

And it’s rather impressive for a Dalek story, isn’t it? I’m very fond of the Cult of Skaro in particular, actually; they’re a brilliantly innovative concept. They do the wonderful trick of elevating the Daleks from monsters to villains – in this story and subsequent ones, that is, and I don’t mean to suggest it’s never been done before – which helps to make the interactions between Doctor and Daleks far more nuanced, and indeed far more compelling to watch. 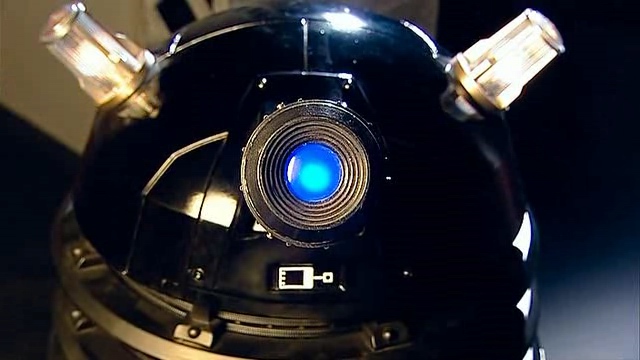 There’s a lot else to like in this episode, of course; I’m going to take some time to highlight those things, because I don’t want to let the drashig in the room overshadow the rest of what makes this episode such a great piece of television – the final ten minutes are great, and they are iconic, but the rest of it is pretty damn brilliant too.

I always comment on Russell T Davies’ character work, because I do think it’s his chief strength as a writer; I’m going to be talking about that a lot in a moment, specifically in terms of the Doctor and Rose, but I think it’s worth taking a moment to look at all the other impressive character moments that are on display in this episode.

Principally, you’ve got Jackie and Pete; just as much as this is the ending of Rose’s story, it’s also the ending of their story. It’s nice, then, to be able to see the pair of them finally reaching a sort of happy ending together – it goes to show you just how effectively Doomsday acts as a series finale not just to the second series of Doctor Who, but also to the past two years of the program.

We also get the opportunity to see Mickey in hero mode; after Rise of the Cybermen and Age of Steel, he’d completed his hero’s journey, and now we’re looking at the end result. It’s fascinating to compare the Mickey we see here – self-assured, confident, and the “bravest human” Rose had ever known – to the jumpy, frightened young man of Rose. It’s a testament to those involved, then, that this evolution feels earned; you can understand the journey, and you can understand why Mickey is who he is now. (Incidentally, I’ve gained a lot of respect for Noel Clarke over the past few weeks, simply because I’ve found out a lot more about the rest of his career. He seems to do a lot of interesting things; definitely going to have to search out his Hood movies and watch those.)

Similarly, Rose’s own hero’s journey comes to a fore this week; she stares down the Daleks, she makes the final sacrifice, and she chooses Doctor-life over any other. Over on Pete’s World, she becomes a ‘defender of the Earth’ – the Doctor for a world that doesn’t have one. It really is very reminiscent of the journey that Clara went on; I know a lot of people draw parallels between Clara and Donna, but I definitely feel like Clara and Rose have a lot in common with one another.

One final aspect worth commenting on, though, before moving on to the main event: Yvonne Hartman. I mentioned last week how impressive I found her character – and now, this week, we get to see her tragic downfall. At the same time, though, there was something of a triumph to her tragedy; Yvonne is the only character we’ve seen with a resolve strong enough to resist the Cyber conditioning. It’s perhaps ironic that she gets her only ‘moral’ moment of the two-parter when she’s been converted; a parallel, maybe, with how Torchwood was always appropriating alien technology for its own benefit. Even in death, Yvonne is still doing what she’s always done.

(And I bloody love that single, solitary tear. It’s one of those defining Doctor Who images which has always stayed with me.) 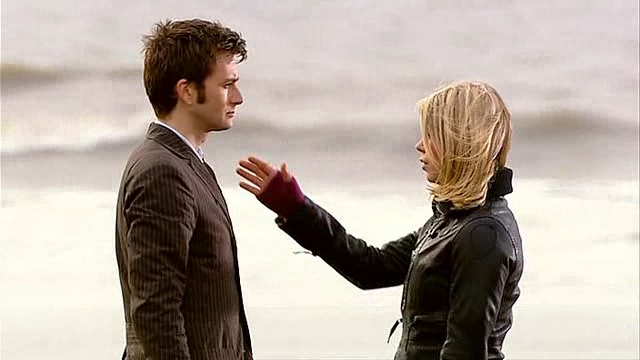 Of course, there’s only really one thing that Doomsday is known for. That scene. Possibly one of the most iconic scenes of Davies’ Who, if not the entirety of Nu-Who as a whole. It is quite the scene.

For a Yahoo article a while ago, I wrote this about the scene:

It’s the culmination of a two-year plot arc, and it is heartbreaking. All of us in the audience have watched these two characters travel together, and grow together, ever since the show returned; it was with the Tenth Doctor that we really saw the depth of feeling these two characters had for each other. And yet, in the end, the Doctor and Rose were ripped apart from each – it was cruel, it was unforgettable, and it was wonderfully written by the fantastic Russell T Davies.

And, you know, that’s completely right. But it’s also a huge oversimplification of what’s really going on in the scene; that, admittedly, was because I was writing it largely from memory, without a proper understanding of the context of the scene.

It’s not just about seeing the depth of feeling this two characters have for each other – it’s the moment when they finally admit to each other how they feel. Because so far, they haven’t; I’ve pointed out over my previous reviews that the love story between the Doctor and Rose is, in fact, quite subtle. They weren’t ever really in a relationship together; it was never anything that complicated, or that mundane. It was just the Doctor and Rose, in the TARDIS. As it should be.

But that’s what really emphasises the tragedy of this moment – there was a sort of purity to it, because it was the first time that the pair of them expressed these feelings. The first time they chose to, because it was the last time they could. Which serves only to heighten the sheer cruelty of “Rose Tyler, -”, in the end – we know what he was going to say, but it’s just not fair that he didn’t get to say it. (All the more frustrating, really, that the pair of them wasted time on little small talk; in a way, though, that makes the moment all the more effective. These two inarticulate idiots, dancing around their feelings – and, in the end, denied even that one final moment together.)

Tennant and Piper are, frankly, perfect here. I’m inclined to say that Billie Piper does better here even than in Father’s Day, with her grief open and raw. Similarly, Tennant does an impressive job of just barely holding it together – wonderfully delivering the Doctor’s ever so slightly dismissive jokes, he really conveys quite how sad the Doctor is. It’s a poignant moment, and I must admit that it had me on the edge of tears. Russell T Davies really managed something special here, it has to be said.

Ultimately, Doomsday is a brilliant episode of Doctor Who. It’s a fitting resolution to the second series of Doctor Who, a wonderful ending to Rose Tyler’s story – and most importantly of all, it’s got a clever hook for the start of next year.

(This time next week, there will be an overall series review & retrospective, and the following week there’s going to be a general analysis on the Tenth Doctor in his first year.)