One of the most interesting aspects of these two part stories is their capacity for world building. Given the style and format of the average 45-minute episode of Doctor Who, there isn’t necessarily the opportunity to really delve into the culture and society of each place the Doctor and Rose land week on week. Consider, for instance, something like New Earth; we get a deft sketch of the hospital, yes, but there’s not a huge amount of detail regarding how it works, what the rest of the world is like, and so on and so forth.

Don’t get me wrong, that absolutely works. I think one of Russell T Davies’ most useful skills as a Doctor Who writer is his ability to give the impression of a wider world with just a few short lines. He’s great at things like that, quite often deploying evocative and imaginative lines, referring to the planet Felspoon, where the mountains sway in the breeze, and so on and so forth. It’s a clever way of hinting at and showing us the shape of a broader world, while still working within the constraints of the format.

But! It’s still really nice to be able to spend some time getting to know a place more slowly, learning about the characters, and just generally sort of luxuriate in the world itself. There was a scene in this episode where we took a couple of minutes to watch Scooti take a space-walk and do some maintenance; though it also works as set up for a later sequence, it is genuinely difficult to imagine this sort of thing happening in the Moffat era, with its hyper compressed narrative speed. It wouldn’t always work, of course, and spending too long on the slower moments would be a mistake… but in this instance, I was quite fond of the little stuff.

The entire episode makes great use of the dirty, “used future” aesthetic that was so popular in movies like the original Star Wars trilogy, or the Alien franchise; we get a real sense that this base is lived in and battered and genuinely right out there on the edge. It’s a really nice way of giving us a sense of a living, breathing world; these people are right out there on the edge of the frontier, just barely holding on and pulling through. You get a sense of that through the characters as well – little details like Zachary Cross Flane (a fantastic, eccentrically futuristic name) being the Acting Captain, rather than the original Captain, giving the impression of the peril they’d been through previously.

Similarly, the Ood are a wonderful race. Neil Gorton did a fantastic job with the prosthetics and the general design – personally speaking, I think the Ood have the best look of all the New Series Doctor Who monsters. That, I imagine, is why they’re so iconic – it’s all down to that bulbous head and those dangly fronds. The design belies a similarly interesting concept, which is that of a slave race. As we know, this is followed up on in the fourth series, but for now, we’re once again given a look at a new and unfamiliar side of the universe. 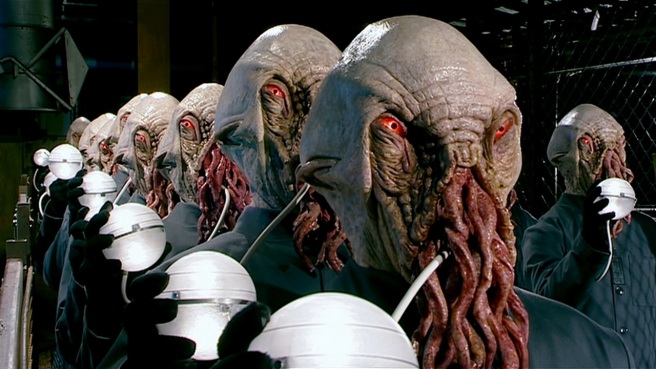 Before this point, the closest to a ‘hard’ science fiction was The Long Game, but even then it was centred quite firmly around Earth and the human experience, given that it was a news satellite orbiting our planet. Here, though, we’re almost entirely divorced from the Earth – yes, obviously, we’ve got a human crew, but that’s just about it. There are a large number of Ood hanging around, we’re on a gritty and grimy space base, and we’re on a faraway planet orbiting a black hole, of all things. This is as sci-fi as Doctor Who has ever been in the past two years.

(I’m using the term ‘hard science fiction’ loosely, realising that Doctor Who takes many liberties with science quite often; I’d be genuinely surprised if any part of this episode was in any way accurate at all. What I’m referring to is more the iconography and the images associated with it, which are of course on full display in this episode.)

At the same time, though, it’s the most overtly horror/fantasy story that the series has done so far as well. We’ve got an ancient language that defies translation, powerful sigils and possession. There’s even the idea of the Devil himself – not a devil, or a demon, but the Devil. Satan, Abbadon, Krop Tor. I’ll talk about this a lot more next week, obviously, as the story delves into this idea more, but for now I just want to highlight how well these aspects work, and the genuine sense fear and tension that’s palpable throughout the episode.

(Again, the term ‘horror/fantasy’ is a bit of a loose one here. I’m aware of things like The Unquiet Dead, obviously, but I feel like the difference is that this is much more of a sort of… almost cosmological horror, really. The Unquiet Dead or Tooth and Claw both saw fairly traditional monsters – ghosts and werewolves respectively. This, to me, feels like something a little more off the wall and outlandish in its approach.)

Essentially, what we’ve got is a sci-fi story which is being haunted by something much older, and much more complex. It gives the whole story a really rich and compelling tone throughout, far more so than it would have had had it simply been about a space base under siege, or a possession story on Earth. By blending these ideas together, The Impossible Planet has a much more powerful set of iconographies working in its favour, and the episode is stronger because of it. 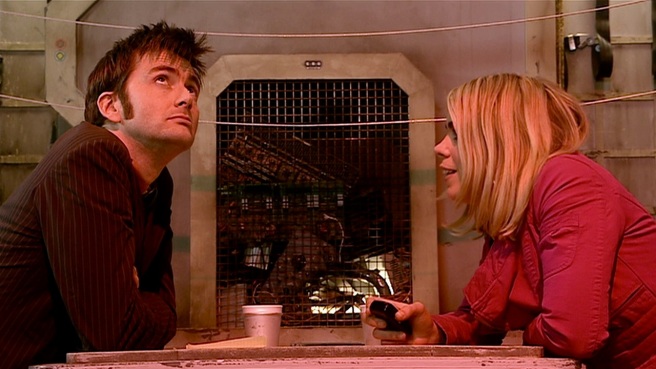 It’s also worth talking about Rose and the Doctor here, not least because there’s some further development of their arc together, but also simply because I’ve not really discussed it in a while.

Often, we talk about the Doctor and Rose as being a love story, and… to an extent, yes, that’s been there for a long time. Certainly, there are little impressions of it during the series – Rise of the Cybermen and Age of Steel both have quite a few moments where you can see how devoted they are to one another – but for my money, this is where it stops becoming subtext, and starts becoming more overt.

A moment that sticks in my mind is when the Doctor and Rose are discussing the possibility of them getting a mortgage. It’s an entertaining exchange in and of itself, because of how utterly the Doctor rejects the idea of a normal life, but there’s a lot more going on there. It’s clearly building to Rose trying to ask the Doctor about the pair of them living together, but when she does bring up the shared mortgage, she ultimately fumbles the moment.

And I liked that! It was awkward, but it felt true to life. The pair of them share such a deep bond, and they’ve saved each other’s lives countless times, but they still struggle with the more banal expressions of affection. To me, that was a pretty nice moment in terms of the development of their relationship, and the general continuation of that plotline.

They both got a lot of nice individual moments too, of course. I was particularly fond of the Doctor asking to hug Acting Captain Zachary, and Rose expressing empathy towards and taking an interest in the Ood works really well. It’s a nice moment which is in keeping with what we’ve seen from her so many times before, and it feeds into the broader message of compassion and tolerance which is so central to Doctor Who.

Obviously, it’s difficult to properly judge this episode, given that it’s only half of a much larger story. I know that the relationship between the Doctor and Rose is going to develop further next week, and similarly the idea of the Beast is going to become much more central to proceedings next week also.

Nonetheless, this episode is still an entertaining episode in its own right; while I’d never just watch it on its own normally, having done so this week, I don’t feel like my enjoyment of it is dependent on seeing The Satan Pit as well.

I’m very much looking forward to it!