Can I just say, traveling with you… I love it.

Those of you with long memories will remember that, in 2014, I did a series of reviews to commemorate the ninth anniversary of Christopher Eccleston’s single series as the Ninth Doctor; each week a new episode, and I managed to cover some of the books too.

Those of you with even longer memories will remember that, in 2006, David Tennant’s first full series as the Tenth Doctor began – today marks Ten Years of the Tenth Doctor.

(Incidentally, I’ve written two articles about this most auspicious anniversary for Yahoo TV; you can check them out here and here. It’s a little selection of the top ten moments of the Tenth Doctor’s tenure – or, at least, some of my favourites.)

In any case, though, I think it is becoming clear what the purpose of this post is – we are embarking upon yet another series of reviews! This time, we’re covering the second series of Doctor Who, which aired in 2006; it was the first time we saw David Tennant in the title role, the first time we saw Cybermen in the modern series, and our final year with Rose Tyler as the companion.

I’m getting ahead of myself, though. Right now, this is about being introduced to a new Doctor – and for me, ten years ago, this was about being introduced to Doctor Who, essentially for the first time at all. Though I’d been aware of Eccleston’s run, I only joined the show at Bad Wolf; this episode was the start of my proper journey with Doctor Who. 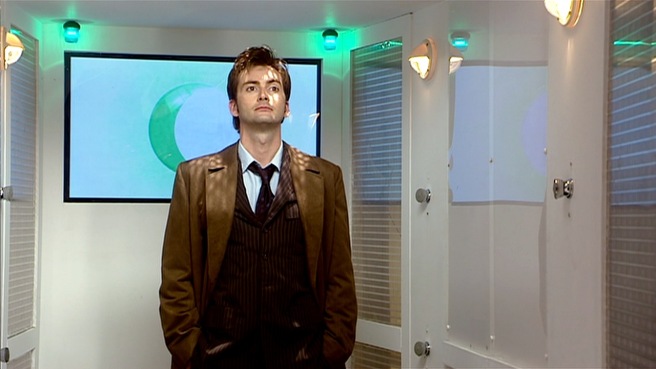 The first, and I think most important question, is as to how successful this episode is at introducing the audience to a new Doctor.

It’s worth considering the position that the show was in when this episode was broadcast; for a lot of the audience, Eccleston would have been the only Doctor they’d ever known. Though the concept of regeneration wasn’t exactly an unfamiliar one, whether a show could survive a second reinvention so soon after its previous one is a legitimate question.

And, of course, at this point David Tennant’s Doctor wasn’t exactly very well known; though people had known he’d play the Doctor for almost a year at this point (given that it leaked not soon after Eccleston’s debut) they’d seen very little of his actual performance. The Christmas Special – aptly titled The Christmas Invasion – was structured around us not seeing the Doctor for the bulk of the episode; he only really appears in the third act, with possibly a little over 20 minutes of screentime.

Conventional wisdom, then, would suggest that perhaps you shouldn’t open the series with a body swap comedy; we’d presumably be better off spending time actually getting to know the Doctor as he is, rather than seeing the Doctor possessed by Cassandra (more on whom later). And, interestingly, this was initially the opinion of the production team as well – as I understand it, Tooth and Claw was originally to be the first episode, with New Earth taking second place. I’m not entirely certain as to why the order was switched in the end, but the fact remains that they were – did it work, though?

I’m actually inclined to say that it did work. David Tennant does a great job here (which we’ll come to expect from him, of course) and the script allows for us to see a general range of the Doctor’s emotions, and get a decent, if still superficial, understanding of the character. We’re introduced to this Doctor’s charm – he’s pretty effortlessly moving around the hospital and interacting with the different side characters – but also his sheer joy and enthusiasm at seeing a new place; the “New New York” exchange is a pretty simple one, but it’s a rather endearing way of showing us this character trait.

Of course, beneath all that, we’ve got some of the first hints of this Doctor’s potential for anger; he’s quick to raise his voice, actually, almost to the point of being quite volatile in his mood swings. That wasn’t something I quite remembered, which was interesting to note; I’ll definitely be paying attention to that over the next couple of weeks, to see if that’s an attribute that remains. Of course, though, it is worth noting that each time he was quick to anger was directly linked to Rose, and her relative safety at any given time; part of this was likely to establish the depth of care the Doctor has for Rose, and their general bond with one another.

As to the whole body swap hijinks… well, it’s difficult to say one way or another whether the episode would have been better without them. Certainly, Cassandra spent less time in the Doctor’s body than I actually remembered; it was, really, just a very short sequence with a couple of jokes. It serves well as a juxtaposition of what the Doctor is typically like, and what the Cassandra-Doctor is like; the episode is essentially defining the character of the Doctor in contrast to what he’s not. For the most part, I think they strike a decent balance with it – I don’t know that it would have worked quite as well had Cassandra spent more time in the Doctor’s body.

The actual plot of the episode is, undeniably, pretty flimsy; like with last year’s Rose, it takes the backseat to the character beats and the thematic stuff. Certainly, the final resolution is weak – even Russell T Davies has said that he came up with that essentially by the skin of his teeth fairly late in the day. Personally, I wouldn’t say that the pseudo-science technobabble they came up with is significantly worse than, say, the anti-plastic McGuffin of Rose, but then, of course, everyone knows that intravenous medicine just doesn’t work this way, so it’s definitely a lot more noticeable.

On the flip side, though, we’re introduced to a lot of quite interesting concepts here, which I don’t think that New Earth is always really given credit for. New Earth itself is a rather quaint idea – I love that line about how everyone gets all nostalgic, and then a revival movement starts. Similarly, the hospital itself is quite inventive; I love the cat nuns, and the patients are a really neat concept. I think they’re also probably the closest that modern Doctor Who has ever come to a zombie story really; in any case, they’ll always have a special place in my heart, because the first time I saw this episode is still the most scared I have ever been by an episode of Doctor Who. Weeping Angels didn’t have anything on these guys; there was something about them that gave me that sense of crushing claustrophobia and being surrounded that just really, really freaked me out.

(“You don’t have to watch it, you know”, said my dad, after I jumped out of the seat for the third time in a row. “No no it’s fine” I said, eyes still glued to the screen. I was terrified, but I bloody loved it.)

There’s also something rather clever, I think, in positioning this as a sequel to The End of the World; we’re seeing our new Doctor, surrounded by the trappings of one of the old Doctor’s adventures. The whole idea of being new is a nice thematic thread across the entire episode – New New York, the new race of humans, etc – and it’s mirrored quite effectively through Cassandra. This is the story of how she has to accept that everything ends, and there’s some nice pathos with that towards the close of the episode.

Everything ends, but this isn’t the time for endings; this is a new beginning, with a brand new Doctor. He’s only just getting started, but it’s one hell of an episode already.