How long is eternity?

I’ve been looking forward to this episode for a very long time, as it happens; the idea of a single hander episode was rather intriguing, to say the least. I love it when Doctor Who is experimental with the format (evidenced by my more-positive-than-the-masses reaction to Sleep No More) and this seemed like a really fascinating prospect. Admittedly, I was also a little apprehensive – it seemed like such a departure from the norm, it’d be difficult to say exactly whether or not it genuinely, honestly would work.

First of all, it’s a wonderful story – the ultimate Steven Moffat puzzle box, where the Doctor is forced to confront his own grief. It’s exceptionally well told, with some wonderful moments; Heaven Sent works as an excellent character study, giving us some fantastic insights into the Doctor. A stand out sequence, I’d argue, is where the Doctor jumps out of the window, and we end up in his “mind palace”, as it were: by flashing back to what had appeared to be a series of fairly innocuous actions, we get a genuinely inspired sequence that does a better job of conveying just how intelligent our hero is than any other scene in recent memory. It was hugely impressive stuff.

In fact, the TARDIS “mind palace” concept was a rather wonderful conceit for the episode to use, which they got a lot of mileage out of. Obviously, with something like this, it’s difficult to convey exposition to the audience, since the Doctor wouldn’t exactly have someone to talk to – but here Moffat came up with a brilliant reason for him to have someone to talk to. He’s talking to Clara (or, arguably, to the audience) and it feeds into a larger examination of his grief at her death. It’s a very effective concept.

The broader, overarching story, was extremely intelligent as well – and actually rather brutal too really. This is surely the most excruciating torture the Doctor has ever been put through, no? Interestingly – and this is something I only picked up on on my second viewing – the Doctor actually realises what’s going on before the audience do. There’s a moment (pictured below) where he stares off into the the distance, and it all comes back to him. He starts begging Clara to let him lose, for once, because he knows about all the pain he’s facing. That’s a fascinating aspect that really enhances the overall story, and, in fact, adds to the ways in which the episode establishes just how keenly intelligent the Doctor is – he cracks the puzzle box before we do. 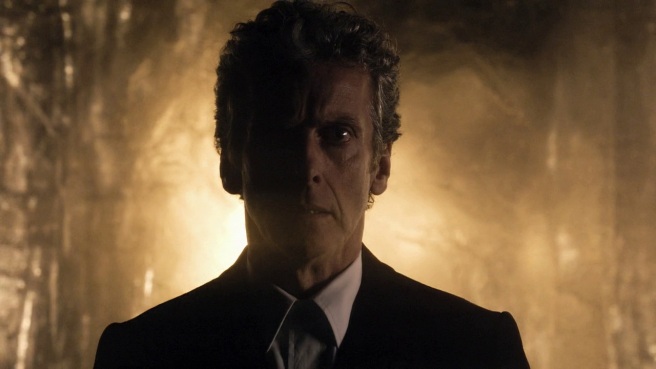 Of course, none of this would have worked without Peter Capaldi.

Capaldi – as I think everyone has already pointed out by this stage – is a phenomenal actor. That’s it, in a nutshell. It’s difficult to unpack that statement as much as he deserves through simply textual analysis; I want, or rather, I need a video to accompany this, just to show the sheer skill of his performance.

Capaldi does a wonderful job of showing the Doctor’s vulnerability; backed up against the wall, no way out. Finally, he’s run out of corridor. (Wasn’t that such a fantastic line?) It’s a really nuanced, subtle performance, and Capaldi does such an impressive job at conveying the raw emotions of the Doctor – we are genuinely, truly lucky to have him on the show. Honestly, we should be treasuring every minute he’s on screen; here’s hoping he remains in the role for a very long time indeed.

Similarly, plaudits must be directed (haha) towards Rachel Talalay who did an exceptional job of directing this episode – which, as you can imagine, would likely have been pretty damn difficult. A moment that stood out to me (which probably is a strange one to pick up on) was when the Doctor was digging; there was a slow fade between different colour palettes to convey the progression of time, which was remarkably effective. Similarly impressive was the transition between a shot of the skull, and Peter Capaldi’s face, which hints at what was to come. There are some great visuals throughout, and it’s all stunningly well realised; it’s worth paying heed to the cinematographer Stuart Biddlecomb and set designer Michael Pickwoad as well.

Admittedly though – and I recognise completely that this is missing the point entirely – the moment that elicited the greatest reaction from me was, in fact, the return of Gallifrey. After nearly ten years, it genuinely seems like Gallifrey is back. The Twelfth Doctor is the first Doctor of the new series to walk on contemporary Gallifrey – I think probably the first we’ve seen do so on screen since the Sixth Doctor. This is a big moment.

The actual shot of Gallifrey is something I really, really love. It’s fantastic in how it’s presented – it looks much more realistic, and far less romanticised, than the one we saw in Sound of the Drums. We’re not viewing Gallifrey through rose tinted glasses anymore, and you can see that immediately from this establishing shot.

That, or the CGI budget is better since 2007. It’s definitely one of them, at any rate.

I’m quite excited for tonight’s episode, actually. Moffat and co seem to be about to invoke the half human aspect of the TV Movie, which I must admit, I find a very exciting prospect. I’m always trepidant about rewriting the lore (I was a little on edge when Capaldi was confessing he left Gallifrey because he was afraid, not because he was bored) but to take a half hearted dodgy retcon from the TV Movie and make it into something genuinely compelling… it’s got a lot of potential as an idea, that’s all I’m saying. (I think perhaps I’d prefer that to Ashildr being the Hybrid, because then at least we’re looking at something that reaches back into the past, rather than both aspects of this arc being new for this series.)

Still, regardless of what happens tonight, Heaven Sent was genuinely impressive. I really enjoyed it, and I think I’ll actually give it a 10/10.

After all, it was one hell of an episode.

Here’s the next set of reviews of Marvel’s Jessica Jones, the new Netflix series. I’m quite enjoying it, as it goes.

Something that I’ve really liked about this show, but not commented on yet, is the use of voiceovers. It’s really effective; Jessica Jones has a great, noir-style atmosphere, and a lot of it comes from those voiceovers. Typically the show does really well in terms of tone and atmosphere, though; once again, without appearing, we get some frightening Kilgrave moments as we start to meet some of his other victims. Personally, the young child who had been taken over stood out to me particularly, as did the story of Kilgrave’s chauffeur.

Also an interesting thing, that I’ve not yet commented on: this is the first Marvel property with any LGBT characters in it – that’d be Hogarth the lawyer, her wife, and her girlfriend. Obviously, it’s great that they’re part of the story, and that Marvel is beginning to make some strides towards a more diverse cinematic universe, but I do wonder about their relevance towards the whole plot. Don’t get me wrong, I’m glad the characters exist, and I do find the plotline interesting (Hogarth is remarkably callous) but it does feel a little disconnected from the rest of proceedings. I wonder how it’s going to proceed from here. 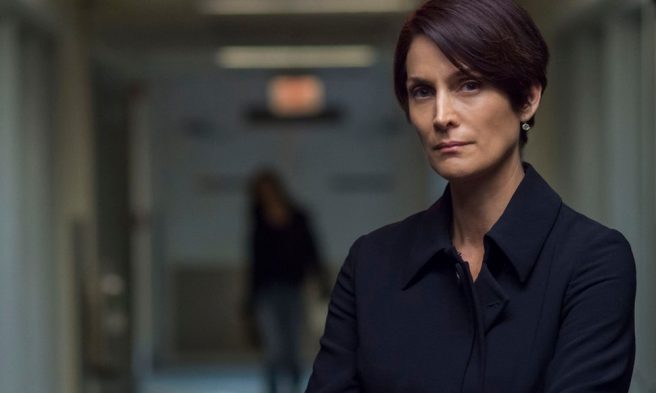 This could well have been the best episode of the series so far, in fact. The flashback sequences were particularly well handled, with their gradual revelation of Jessica’s past. It was quite poignant, actually, seeing her “before Kilgrave” state, where she was much happier, and working with Patsy to create the Jewel persona – actually genuinely going out and trying to save people, like Malcolm, because she likes helping people. All of that cut down, stopped in its tracks, because of Kilgrave. I’m really hoping we follow this thread with the flashbacks, and explore more of the past there.

Kilgrave himself finally got some substantial scenes, and he is terrifying. David Tennant is doing a really phenomenal job with this; in many ways, and I think intentionally, he’s channeling certain aspects of his portrayal of the Doctor here, to make Kilgrave all the more loathsome and slimy. In a way, you’d almost be inclined to describe him as charismatic – but that’s not right, because there’s always something much more insidious and disgusting lying beneath the surface. As a character, he’s never failed to be compelling yet; the final scene of this episode, where Jessica sends him the picture of herself, is genuinely unsettling. 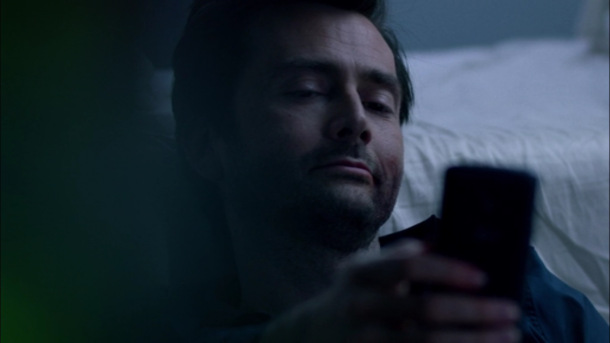 With this episode, we start to delve into the past between Jessica and Luke a lot more deeply. It was a really interesting angle that they’ve included here; I don’t know if Jessica killing Luke’s wife was ever part of the comics, and if it was, it’s certainly not something I was already aware of. That’s nice, actually, not knowing the direction in which this is going, because it’s added a really interesting layer to the relationship between Luke and Jessica, which should prove to be pretty compelling as they move through the series.

Two other, rather wonderful, moments stood out to me. For one thing, it was really great to see Jessica in her element here as a PI, really being able to show off her skills as a detective. Of them all, this episode has probably done the best job of demonstrating just how good at her job Jessica is – which makes sense, really, given the focus of the episode.  The other standout moment I was referring to was the ending, with the slow revelation that Kilgrave was buying Jessica’s childhood home. It was chillingly effective, particularly in terms of the camera pan to reveal the street sign, with the names Jessica has been reciting as a coping mechanism all throughout the series. Really enforces just how loathsome a villain Kilgrave is.