-orks, of course, because we’ve already seen this moment from the other perspective. What was earlier a clever in media res style opening is now viewed in an entirely different light; what was serious becomes farcical, contributing to the jovial, lighthearted tone that had been present throughout the whole episode. Naturally, though, it’s all set up for the final twist, the entry that punctures the episode itse-

So, the sixth episode of The Flash, with a fairly ominous sounding title. Enter Zoom. Zoom, of course, is our big bad for this season. I admit, I’ve had my doubts about Zoom. It seemed to me to be a little reductive to simply have another speedster bad guy after the wonderful Harrison Wells; like, say, continually pitting Oliver Queen against a series of increasingly more accurate archers. I didn’t really feel like any speedster villain could match the emotional stakes of Barry vs the Reverse Flash, so I wasn’t sure if there was any point, really. Much better to just further the development of the Rogues, say, or introduce another new villain. (Aliens seemed like a cool idea, actually.)

Regardless, though, this episode was a good one. The character arcs of all involved are furthered along, but particularly those of Barry and Harrison Wells.

Barry’s dedication to stopping Zoom was well realised, and he was given an interesting motivation to do so as well; his fear that the other Wells, Eobard Thawne, was right about him when he said he’d never be happy. The suggestion is, I suppose, that Barry is depressed in some regards, and he’s leaning into his secret life as the Flash to try and cope with it. It’s a compelling idea they’ve put forward, there, albeit one I’m not expecting them to delve into particularly deeply. Still, as subtext, it’s a nice concept, and Grant Gustin did a great job of portraying it – as an actor, I don’t think I give him enough credit for the work he does in portraying Barry Allen, because he really is fantastic at it.

Wells’ storyline revealed more about his past on Earth-2, as well as some interesting information about his daughter – when her name was revealed, I was pretty surprised, lemme tell you. It’s a great motivation to give him, which makes this Wells both distinct from and similar to his predecessor in several ways; the old Wells, after all, did come to care about Barry as though he were his own child. I’m really looking forward to seeing more of Jesse… quickly. 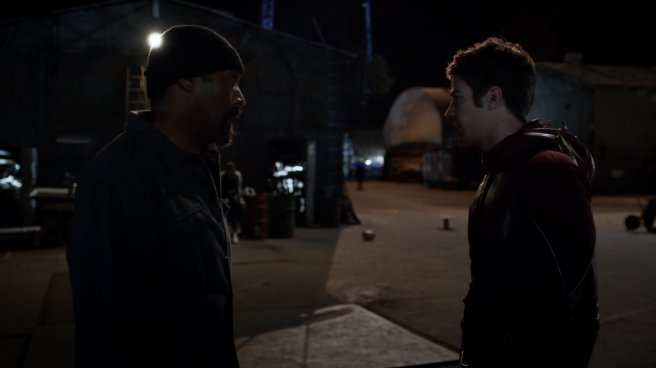 The main plot of this particular episode is also actually genuinely very funny in many respects. After Dr Light from Earth-2 escapes (the one that we met in last week’s episode), Barry and the STAR Labs team end up recruiting Linda Park from ‘our’ Earth, who dated Barry last year, to pretend to be Dr Light in the hopes of fooling Zoom.

It is, as you can imagine, the sort of set up that’s ripe to develop humour with. And that’s exactly that the show does – they take the concept and they run with it (haha). You get lots of great jokes; Cisco’s cardboard cut-outs of each character are a particular delight, and it feeds into a great comic sequence where Linda is learning how to use her powers. It’s an effective bit of levity, and it’s something they do a really good job of maintaining all the way throughout the episode. It carries forward to a similarly effective reframing of the opening of the episode; the circumstances of the first fight between Dr Light and the Flash are now explained, and it’s revealed to have been Linda all along.

It works, of course, because we’ve already seen this moment from the other perspective. What was earlier a clever in media res style opening is now viewed in an entirely different light; what was serious becomes farcical, contributing to the jovial, lighthearted tone that had been present throughout the whole episode. Naturally, though, it’s all set up for the final twist, the entry that punctures the episode itself.

Zoom was a genuinely threatening villain. He had a real screen presence, which I don’t think any of the CW DC villains have had before; Reverse Flash, Malcolm Merlyn and Slade Wilson never had this weight attached to them. He has a power over the narrative itself; Zoom distorts the episode, pushing it off course, and changing the very genre and tone of the story. The sheer brutality of the character is juxtaposed with the lighthearted humour that’s prevailed throughout, and the whole episode shifts, the moment Zoom arrives.

Zoom wins, at the end of this episode. He fights Barry, and he beats Barry. Wipes the floor with him. But that’s not all Zoom does; he destroys the Flash, going to great lengths to humiliate him, and end the image of the hero. This is something that not even the Reverse-Flash did; Zoom has one singular goal, and in his pursuit of it, he’s brutal and sadistic and effortlessly cruel, as though in the end, it’s all just inconsequential to him.

That’s truly, really effective. Zoom is shown to be effective; in just ten minutes of this episode, he’s almost completely destroyed our hero with brutal efficiency – not just in terms of his life, but his legacy as well. The ability to not just run faster than Barry, but to control Barry’s own TV show, completely changing the tone and the feel of the episode… it marks Zoom out as a truly threatening adversary.

I was wrong, you see. Zoom is not just a cheap imitation of the Reverse Flash.

Zoom is on a whole other level.

This review was recently posted on the Yahoo UK website.