So, then. There’s an elephant in the room, here – one thing that must be addressed, above all else; the most obvious starting place, I think, but a starting place I’m going to eschew. Because I want to talk about all of the episode, and recognise the strengths of it all – otherwise this would be thousands of words about a very specific segment. (I’m sure you all know the segment to which I refer!)

The episode starts quite well – I’m not typically fond of dream sequences, but this was an excellent example of how they can be used effectively. I thought it was rather clever how they managed to subvert expectations with the cliffhanger – appearing to show the initial get out clause, before making it relevant once again, and pushing our answer further away from us. It was, in fact, a rather wonderful example of Harness (and Moffat, for once) being able to have their cake and eat it.

It continues on quite well too; the dream sequence is where we see most of Clara for this episode, arguably sidelined, but still given some interesting and substantial character moments. Very effective examination of her on display here, in fact; there’s the initial smugness to Clara, where she feels entirely in control – and the backpedalling when she realises she isn’t, and has to search for the upper hand again. It’s a very nuanced scene, and remarkably well portrayed by Jenna Coleman; this is the sort of examination of Clara’s character development, transforming into a more Doctor like figure, that I’m so fond of. ‘Tis a very compelling character arc for a companion, and I’m really looking forward to seeing the culmination of it.

Speaking of Jenna Coleman’s acting, she did a really fantastic job of playing Bonnie. I think it’s the mark of a great actor when they can play a dual role within a single story (like Mat Baynton in You, Me and the Apocalypse) and still make them feel meaningfully distinct – it was very easy to forget that Jenna Coleman was playing Bonnie here, as opposed to another actress entirely (albeit admittedly a similar looking one). She did an excellent job of completely altering all her mannerisms, even her voice and elocution, to create an entirely new character; Doctor Who is really genuinely very lucky to have Jenna Coleman onboard, and it’ll be a huge loss to the program when she eventually departs. 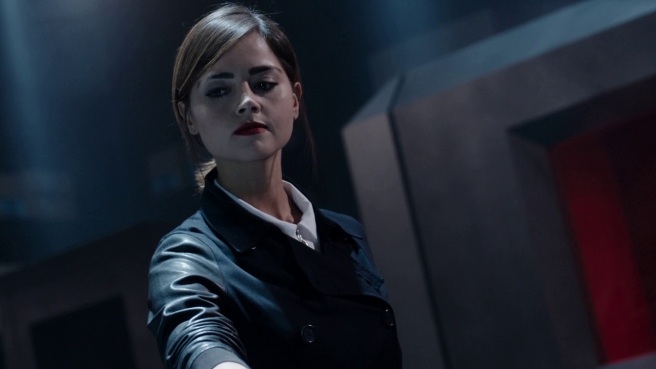 Much of the rest of the episode was of similar levels of quality; Ingrid Oliver as Osgood, playing the de facto companion of this episode, was as charming as ever, and it remained very entertaining to see her interactions with the Doctor. Kate Stewart too came out of this episode well, and it was nice to hear her say the old “Five rounds rapid” quote. (What can I say, I’m a nerd.)

Also! Something that’ll likely fall through the cracks when people are discussing this episode, given that many of its main strengths lie elsewhere, but it was a genuinely very funny episode. Lots of excellent jokes, that were really quite hilarious; I always love any sort of irreverent fan humour, like the question mark underwear, or “Totally and Radically Driving in Space”, and even little things like “Doctor John Disco” or “Basil”. It’s good to have that sort of thing – where’s the fun if you take it too seriously? Excellent approach to take, I think. The funniest joke, though, was “I’m old enough to be your messiah”. That takes the award for “best one liner in Doctor Who history”, I’d argue. Honestly, it was brilliant.

The writing, obviously, was excellent. Not just in that scene, which I’ll get to shortly, but just throughout, really. One crucial moment was when the Doctor and Osgood met the Zygon in the shop – one of the most important scenes in the episode, in fact, because that’s where some of the most important aspects of the episode’s message about immigration comes through. The Zygon insists that he isn’t on any side, and all he wanted to do was simply live, question just what exactly was wrong with that, and why no one would let him simply live there. It was excellently done – not subtle in any way, of course, but frankly there’s no need to be subtle at times like this.

And now we’ve reached this bit. A ten minute monologue from Peter Capaldi which is, frankly, certainly going to be seen as the standout moment from this series, if not the defining moment of the Twelfth Doctor’s tenure. Because it is just that bloody good.

I don’t understand? Are you kidding? Me? Of course I understand. I mean, do you call this a war? This funny little thing? This is not a war!

I fought in a bigger war than you will ever know. I did worse things than you could ever imagine. And when I close my eyes I hear more screams than anyone could ever be able to count!

And do you know what you do with all that pain?

I’m quoting, simply because I don’t have a video to embed (as soon as it’s up on YouTube, I’ll be going into more depths in terms of analysis), but that honestly robs it of much of its impact. Sure, it’s well written, but the strengths of this scene comes from Peter Capaldi’s acting. And frankly, that’s not even all of it – the first half of the scene, where he talks about how much blood is spilled before negotiations can begin, is similarly masterful.

Capaldi is absolutely phenomenal in his role; there’s a huge level of nuance to his every mannerism and expression, and he absolutely conveys the emotion of the scene 100%. (You can see how much they trust him as an actor – and rightfully so! – because this scene is entirely quiet. There’s no score or backing music; every response and emotion engendered in the audience comes entirely from Capaldi’s performance.)

Truly, he’s amazing; it’s difficult to properly analyse this scene without a video accompaniment, because otherwise I’m reduced to simply describing rather than demonstrating, and repeating the same limited pool of superlatives over and over again.

I think what stood out most, actually, was that the Doctor got angry here. Capaldi has always measured the anger, keeping it very much something limited to individual occasions, and it means it’s all the more effective when he does play it up. Seeing the Doctor yelling and being so confrontational, practically shouting them into submission, really emphasising the importance of peace over war, and referring back to his past traumas – honestly, it’s BAFTA worthy. Capaldi deserves all the awards for this episode, truly and absolutely.

This episode was honestly everything I could have hoped for and more; it’s the best of the series, hands down. 10/10