Why is there no such thing as perfect hiding?

I went through quite a few different openings for this one. Various different ways to frame it, you know? I considered talking about the time of year, and other Doctor Who episodes that have been around this date in the past. I thought about mentioning people’s expectations, how this one seemed to be quite a good one in the lead up.

But, honestly, I didn’t quite see the point here. Actually, in all seriousness, I struggled a little bit writing this review. I couldn’t quite bring myself to do it, because it didn’t really feel worth spending the time on it.

It’s not that it was bad, although I certainly didn’t enjoy it. It was just… meh, I guess? I mean, there were bad things, and good things, and all it ever really added up to was… meh.

I get the feeling I’m going to be distinctly in the minority here. Which is, you know, fair enough. That even makes it more fun, actually, this giving of criticism. As much as I love it when people agree with me, the debates prompted by a difference of opinion are great. A group of people on the internet, who’d rarely talk in the real world, all brought together to critically discuss and analyse Doctor Who? Brilliant. (No, I’m not invited to many parties, why do you ask?)

It’s entirely possible that I just didn’t get this story. That happens; sometimes it’s nothing more than a difference of opinion, where one person can’t quite get the same feelings or responses from an episode. It just… doesn’t work for them. Listen absolutely falls into that category for me. There were plenty of smart aspects to it, and there was a lot to appreciate… but I don’t think I could ever really manage more than to appreciate it. Certainly, I don’t think I’m ever going to enthusiastically love it. 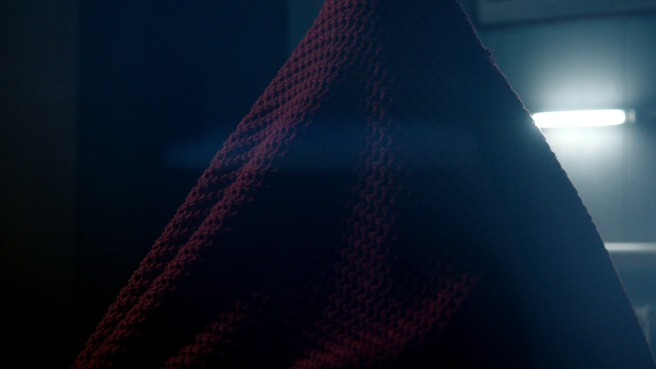 We’ll start with the positives, obviously. The big thing to love about Listen is, I think, the way it looks. It’s really well directed. The opening sequence is just lovely; the transition with the fish stood out to me in particular actually. Throughout the episode though there’s a real, palpable tension to it, which does come primarily from the direction and the lighting. It’s very evocative; all of those scenes in the dark really did capture, for me at least, that sense that there could be something you don’t quite see. Out there, watching, waiting.

In the writing, too, there’s a lot of plusses. It’s rather funny, in quite a few places. The “Where’s Wally?” bit was very, very good, as were a few of the one-liners here and there. The Doctor’s speech about how fear is a superpower is very endearing, and it’s fantastically delivered by Peter Capaldi – there was something about the way he acted it out, and the way he spoke, that really added another dimension to it.

But, honestly? The well starts to run dry there. All 23 of them, in fact.

It was pointed out, before this episode aired, that this is Steven Moffat’s first ‘normal’ episode since The Beast Below – everything else has been a series opener, or a finale, or a special, or a River Song episode. This is one of the first times he’s been able to write an episode devoid of any such trappings, and just take an idea and run with it.

And what he does is… resort to the same, tired old tropes.

Now, I am, by and large, a fan of Steven Moffat’s work. There’s certainly some ropey bits, and indeed some bad bits, but generally, I like it. I really think he brought some great things to the series, and the timey-wimey stuff is actually quite clever. But when he first did it, it was clever because that was, more or less, when it was first done. Now though? We’ve seen it quite a few times. The shine is gone.

We’ve seen companions as children. We’ve seen them being influenced by the Doctor, and seen their adult selves be shaped by that experience. (Specifically, we’ve seen Reinette, Amy, arguably River, and Clara all in this position. We can add Danny and the Doctor to this now. The only one who escaped it is Rory!) We’ve seen stories taking on a cyclical nature, with the ending influencing the beginning and the middle in a strange, ontological way. It’s practically Steven Moffat’s trademark, by this point. There was even an exact “scary scene” in Listen, which had been more or less completely redressed from Blink. “Don’t look away, don’t turn your back, and don’t blink”. “Don’t look, don’t turn around, close your eyes”. 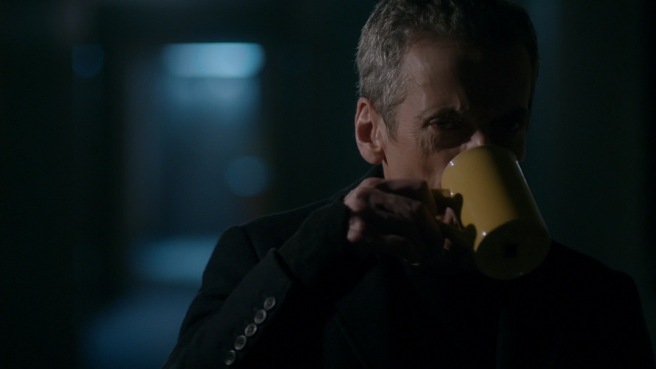 It… I am not against old ideas being reused and revisited. More often than not, these things have the potential to be used more than once. But there is a cut-off point. In fact, there’s something Steven Moffat said recently, which I’ve been quoting a fair amount to explain why the series needs to change – “When your new idea becomes your old idea, you need to do something different.” Seems as though he needs to take his own advice really.

(I mean, in all seriousness, what has this episode added to Danny Pink? It would have worked just as well with the Rupert and Orson being any other character. All this managed to do was inextricably tangle Danny with all the old, dated tropes, and indeed remove any interesting character motivations he may have had. “Why did he become a soldier?” “Clara, or something.” “Right, cool.”)

And it’s a shame, it really is. Because at its heart, Listen has a fascinating idea, and could have had a brilliant pay off. Sometimes irrational fears really are just irrational fears. Sometimes there are no monsters. That’s absolutely wonderful, but it needs to be done with a degree of subtlety. One which wasn’t really on display here. Or rather, it was there at times, but was ultimately taken away from by all the things we’ve seen before.

I mean, there never was any monster. It was set up and subverted at every turn – whenever there was the implication of a monster, a reasonable, rational explanation was provided. (My favourite was the bit with the coffee cup, actually.) And that’s the point – there was never a monster. But the ending got muddled and bogged down, and it lost that.

It lost that, I think, in no small part because of the sequence with Theta. It took the focus away from what was actually going on, and obscured it with a “look, Clara influenced the Doctor!” moment. How sparklingly original. (Also, the closing moments with the First Doctor quote, whilst absolutely lovely, would have had very little impact on anyone who wasn’t in the know. If, however, the irrational fear aspect hadn’t been obscured by all the “clever tricks”, well, then they’d have a greater resonance within this episode, as well as being a nice callback to An Unearthly Child.)

I mean… I guess this episode just ends up being a bit of a write off. And it’s a massive shame, really. It could have been so much, but because it was insistent on using old tropes as a crutch… it faltered, and, ultimately, failed.

Note from Alex of 2018: Four years on, I am increasingly convinced I probably would have appreciated this episode more if I’d rewatched it a couple of times. I haven’t seen it again in the time since, I don’t think, but it is one I intend to get to – I think I was probably quite unfair above, and it deserves the re-evaluation.