You have replaced every piece of yourself, mechanical and organic, time and time again. There’s not a trace of the original you left. You probably can’t even remember where you got that face from.

Regeneration is a tricky old thing, isn’t it? It’s all well and good to say that life depends upon change and renewal, but it can be pretty weird to see a new Doctor in the role.

When Christopher Eccleston regenerated, I had only been watching the show for about two episodes, so I didn’t really get what was going on. When David Tennant regenerated, I was generally okay with it; I got the concept, and I thought he’d had a good run. With Matt Smith, it’d been quite a surprise, and I thought it was a bit of a shame – I think his last year wasn’t really as good as it could have been.

I like the fact that the show changes. I like that every few years, Doctor Who completely reinvents itself, and you end up with something new. I think it’s brilliant – it’s how it’s lasted 50 years, after all. So I’m never going to begrudge the show a change, though I might be a bit trepidant about it.

But there was no need for any trepidance here, was there? It was fantastic.

The most important thing about this episode was, obviously, to introduce Peter Capaldi. That’s the real job of it. And I think, on the whole, it did pretty well. The opening with the addled, confused Doctor was quite funny; I think maybe it was extended for a little too long (it’s about 25 minutes before he starts to settle down) but as a sort of tradition, it’s quite nice. And then after that, you’ve just got so many quality scenes with Capaldi – there’s the one with the tramp (it’s the next pigbin Josh!), his bantering with Clara in the restaurant, and the moment where they meet the robots (“Dormant. Hopefully.”) Loved that.

I think he really comes into his own though towards the end, especially where he offers the robot a drink. That moment I loved, and I felt like the new Doctor was really here. There he is; calm, collected, and with a cold, steely ruthlessness to him. And then the ambiguity surrounding the robots death, and just how involved the Doctor was with it. Did he intimidate the robot into committing suicide, or actually push him out himself? 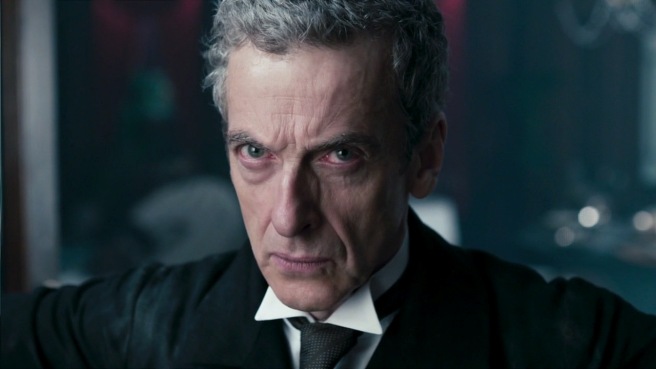 Companions! Clara, Vastra, Jenny and Strax. Clara was excellent here. Generally, I liked her over the last year, but I would certainly concede that she wasn’t the most well used or characterised. It’s really nice to see that changing here, and letting her come into her own a bit more. I’ve already said how I enjoyed her scene with the Doctor in the restaurant, but I think if I had to choose her best moment of the episode, it was where she was talking to the robot. Clara really held her own there; it was a well-written scene, with some pretty good acting to hold it up.

And Vastra and Jenny! Wow. I must admit, I am not normally a fan. I’m on the record as being totally bewildered by why they’re so popular, but I really, really liked them here. They were fantastic, as was the relationship between them. This was the first time, to me, it actually felt like a real relationship, as opposed to just the subject of a joke. In fact, this was their first appearance without a joke about their relationship – it’s finally grown beyond that. I’d be a lot more open to a spin off with them now. (With regards to the kiss, I did like it, but it might have been nicer if it wasn’t under those circumstances. Or better yet, they did that, and then again afterwards to celebrate or somesuch similar.)

Strax, still not such a fan. A lot of his humour just doesn’t wash with me. Bits of it were funny, but I think the comedy Sontaran is being pushed far too much now. It’d be better if he were played absolutely straight, and the jokes around him came from how serious he was. That’d be better I think. The bit where he was about to kill himself, to stop breathing – that’s the Strax I want to see more of. (Mind you, that was pretty dark, wasn’t it? Quite shocking even.)

The plot held up quite well too I think. In episodes like this, where you’re introducing the new Doctor, you don’t want to overdo it with something particularly complex. It’s best to just let the Doctor deal with something simple, and use the time to focus on characterisation. Still, it was pretty good, wasn’t it? Loved the return of the robots from The Girl in the Fireplace. It’s things like that that make me smile when I’m watching the episodes. Nice little callback.

It wasn’t perfect though, to be fair. There were some jokes that just weren’t funny – some of the Strax jokes grated, like I already mentioned. The scenes with Clara and Vastra at the beginning, all of that veil stuff… it was just nonsense, wasn’t it? Trying to imply that Clara was an impostor, but really it’s about how much they trust her, and… nah, load of old nonsense really. I just don’t get how that’s meant to fit into things at all. Well acted though, from all involved.

But, on the topic of perfect, there was one thing in the episode which damn near was. That phone call, at the end. I knew it was coming – I’d read about it months ago, and I remembered about it half way through. When I first found out about it, I was ready to come along and whinge about it on tumblr, but I’m glad I didn’t. I hate being wrong in public, after all. It was really nice, and lovely to see Matt there. It felt like a passing of the baton in a way his regeneration didn’t exactly. It’s the same sort of thing as in The Eleventh Hour, when the Atraxi roll through holograms of the different incarnations. Except this goes one better. It really emphasises he’s the same man. And it was really sweet, too.

So overall, that’s a really good episode. It did brilliantly setting up Peter Capaldi, though it did have some faults. I think I’ll give it an 8/10 – it gets better with rewatches.

Note: Despite being very specific about leaving these old reviews mostly unedited, in terms of their content at least, there were a couple of lines in here that really grated with me when re-reading this piece in 2018 that I removed.