You’re amazing. The lot of you. Don’t know what you do to Hitler, but you frighten the hell out of me. Off you go, then. Do what you got to do. Save the world.

You know, this episode has something of a reputation, doesn’t it?

Widely held up as one of Steven Moffat’s best episodes, considered by many to be one of the best episodes of Series One, and it was voted as the 5th Best Doctor Who Episode Ever in DWM’s Mighty 200 poll in 2009. And, it’s won a Hugo Award.

So it’s a little bit of a big deal actually, isn’t it?

One of the things which stands out, almost immediately, is that this is actually really, really, funny. There’s a couple of jokes that are quoted a lot, like “I don’t know if it’s Marxism in action or a West End musical”, or “I’m looking for a blonde in a Union Jack T Shirt. A specific one, I didn’t just wake up with a craving” but my own favourite is nearer to the beginning, when the Doctor’s in the nightclub. The whole exchange where he asks about something falling from the sky and making a large bang, then realising he’s in the middle of the Blitz… priceless. It’s a joke that only really works once though probably – I already know it’s set in 1941, so the effect is lessened… but it’s still hilarious. So’s Christopher Eccleston’s expression, it’s fantastic.

Another thing I liked about this episode was that, in being a two-parter, it was allowed to take the pace a lot more slowly. It got to a point, about 35 minutes in, when I realised that all of the preceding scenes would have had to be condensed down to 10 minutes if this were a normal episode. It was nice, actually, being able to take things more slowly, and show the quieter character moments. I must admit, it’s something I sometimes miss in the show now (which is not to say they don’t exist, obviously, just that there’s fewer of them).

The fact that we had the time spent with the kids, or with Dr Constantine, meant that the threatening moments had a far greater impact than if we hadn’t already had those crucial scenes with them. Dr Constantine’s transformation is one of the best moments of the episode; it’s wonderfully structured, foreshadowed and hinted at well, and when it actually happens, it’s actually rather frightening. And in establishing what happens to him, it makes the cliffhanger even more potent later on.

The Empty Child himself, or itself, is actually really creepy, isn’t it? It’s got a very, very eerie voice. A sort of… quality to it. I suppose that’s why, bar “Exterminate!” and maybe “Delete”, the most quoted monster phrase from recent years is “Are you my mummy?”. That’s always a spooky, spooky thing. 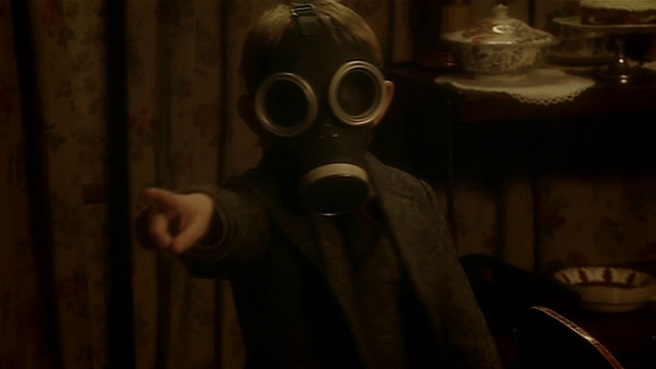 Something I like about the cliffhanger, though it’s probably just coincidental, is that the scene with Nancy underneath the table echoes the scene in Matilda, where Matilda is under the table in Trunchball’s house. It’s a really tense scene in that movie, and some of it translates into this scene as well. I imagine the point was to have connotations with hide and seek, that sort of thing. Juxtaposition of the mundane and the threatening. Very good, very Doctor Who.

On the topic of children, it was pretty interesting to see the Ninth Doctor’s only lengthy interaction with children. It was particularly interesting to think about it in terms of the 50th Anniversary, and the 2 billion children on Gallifrey. There’s a few Time War references in there anyway, like “Before this war, I was both a father and a grandfather. Now I am neither, but I am still a Doctor”, and “You lose someone. That’s why you’re doing this, helping people”. The way he reacted to someone calling through the TARDIS phone was interesting as well.

The Doctor was pretty at ease with the kids at any rate, which was nice to see. Happier than he seems around adults at times even.

So… a very, very good episode. I’m unwilling to give it a ten out of ten though, because it doesn’t quite feel like an episode, more like… the first half of a ninety-minute film. Which it is, really. That’s not a criticism, just an observation. So… hmm. I did give Aliens of London its own grade, didn’t I?

Alright. I’ll give it a provisional and ever so slightly arbitrary 9/10